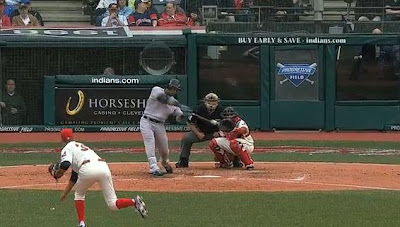 First pitch of Cano's third at-bat against Ubaldo Jimenez, after working a 1st-inning walk on mostly changeups away and hitting a first-pitch slider up and slightly away for a leadoff double to left field in the 3rd inning.  Jimenez tries to come at Robbie with another first-pitch changeup away and Robbie was ready for it.  He kept his hands back, rotated his hips through the hitting zone, and powered this ball over the fence in left-center. 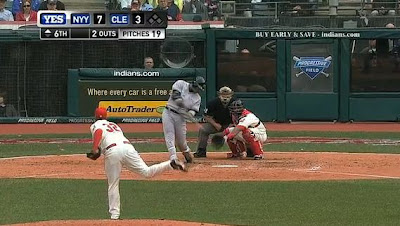 Fast forward to the next inning, with Matt Albers on the hill in place of Jimenez.  After going away, away, away on him all day, Cleveland tries to get cute and sneak a curveball inside.  Once again, Robbie was ready for it and adjusted his swing accordingly, this time depositing the ball in the right-center field seats for his 2nd homer in as many pitches seen.  It wasn't even a great pitch to hit, but Cano anticipated it, cleared his hips through the zone, and squared the ball up enough to hit out.

So to review- 2 completely different pitches (changeup up and away, curveball down and in) from 2 different pitchers; 2 swings, 2 home runs.  Cleveland stuck to the "pound him away" formula and got beat on it early, then got beat again when they tried to change things up.  Robinson Cano is just that good of a hitter, and that's why he's going to be just fine.

(Screenshots courtesy of the YES Network and MLB.com)
Posted by Unknown at 2:30 PM