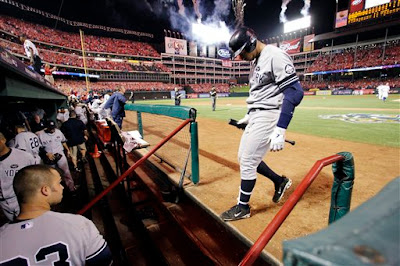 (Photo courtesy of The AP)﻿
- What was up with TBS recapping Colby Lewis' history through the Majors and Japan like it was supposed to be a list of accomplishments.  All that proves is that Colby Lewis has sucked for the majority of his career.  I mean, if you get signed and then released by the Kansas City Royals within a month, you aren't exactly Greg Maddux.

- Lewis was solid but nothing special through 3 innings, much like he was in Game 2, and yet the Yankee offense couldn't do anything with the hittable pitches he was giving them.  And was it me, or was Brett Gardner 0-2 in every at-bat he had this series?

- The Hughes wild pitch on an intentional walk to Josh Hamilton in the 3rd pretty much told the story of his night.  He couldn't throw the ball where he wanted to when it WASN'T supposed to be in the strike zone.

- It also wasn't helping that he seemed to be attacking every hitter away, righties and lefties.  Whether that was the intended gameplan or just an audible made by Eiland and Jorge when they realized Hughes didn't have his best stuff, going away, away, away against good hitters is not a good plan.  You have to at least try to come inside and get them moving.

- The only 2 good at-bats through 4 innings for the Yankees were Curtis Granderson's walks.  He did an excellent job taking pitches up and away and fighting off the fastballs inside that Lewis was throwing him.  But again, when the best thing your offense has done is draw 2 walks, that's pretty fucking sad.

- That ball definitely hit Swish in the 5th inning on the fake wild pitch that scored A-Rod.  How anybody could miss that is beyond me.  This game needs instant replay now.

- Walking Josh Hamilton to pitch to Vlad worked in the 3rd inning, but not in the 5th.  Hughes threw a terrible hanging curve up and over the plate and Vlad destroyed it.  I know he didn't do much in the series, but Vlad DID drive in 115 runs this year.  Walking an excellent hitter to pitch to another excellent hitter multiple times just wasn't a sound strategy by Joe, especially when his pitcher wasn't locating.

- After Hughes was removed, D-Rob was called on to stop the bleeding and he was just awful, giving up the HR to Cruz that was pretty much the nail in the coffin.  Why CC was not brought into the game is beyond me.  All we read about yesterday was how CC was available for an inning, maybe 2, and how he thought he could throw 40-50 pitches if needed.  And with the lead lost and the game slipping away against a dominant Colby Lewis, Joe goes to his 4th best pitcher he had out there.  If he didn't want to go lefty-righty with CC facing Cruz, fine, but there was no reason for D-Rob to be in that game in that situation.  With the season on the line, the first 3 pitchers out of the 'pen last night had to be CC, Wood, and Mo in some order.

- Terrible job by the ballgirl on the first baseline last night.  Never got in front of the ball, never attacked it, just sat back and let the thing roll past her every time.  If I would have had a field-level seat down that line last night I would have been screaming "Come on, Dorn!!  None of this 'Ole' bullshit!" at her all night.  And that's because I am a terrible person.

- Jeter with 2 first-pitch swinging groundouts in his first 3 at-bats.  Why?  Why, why, WHY????  It's like he's trying to give the Yankees a reason to sign him for fewer years and less money in the offseason.

- Was Ms. Texas serious with that "God Bless America" performance last night?  She was hideous, she couldn't sing, and she was wearing the fucking crown and sash.  That's a bad job in a big spot by her last night, Mikey.  Just a terrible job.

- You're down 5 runs in the 7th inning, so naturally you want to intentionally walk more baserunners on to load the bases and potentially make the deficit even greater, right?  Seriously, what the fuck was Joe doing with the bullpen this series???  He made a great call in taking the fucking chalupa kid out at the first sign of trouble for Mo and then with all his real pitchers he's leaving starters out too long, intentionally walking everyone under the sun, and playing binder matchups with his team's shittier pitchers against the other team's better hitters.

- Jeter's flailing, half-swing strikeout was the perfect capper to his awful season.  The Yankees really need to be serious in their negotiations with him in the offseason and at least make him realize that he sucks now instead of bending over and giving him a 4-year, $15-20 million a year deal.

- Mo in the 8th?  Really, Joe?  Why bother at this point?  That's just insulting to Mo that you wait until the game is all but over to finally use him.

- Call me insensitive if you want, but I don't give a fuck about Ron Washington's house in New Orleans and how much time he spent rebuilding it.  If the guy was smart, he wouldn't live there in the first place.

- The A-Rod strikeout looking to end the game was perfectly fitting for how this series played out.  The Yankees were just completely overmatched in every aspect of the game and basically went down without a fight.

- I'm not even going to get into the details of each pitcher's outing.  Hughes sucked and couldn't put the ball anywhere that he wanted to and Colby Lewis had great command of all his pitches.  He was on top of his game and the Yankees made him look even better by doing nothing with the mistakes he did make up in the zone.

- When you really look back on the series, Game 5 was the aberration and the rest of the series was the truth of the matter.  The Rangers outhit, outpitched, outran, outhustled, and outmanaged the Yankees for the overwhelming majority of the series.  They were the better team and they deserved to win.

Nail in the coffin.  You could almost see the Yankees give up as that ball landed in the stands.

Player of The Game: Colby Lewis

- Well that's it for this season.  Now we can all start to plan for 2011 and start guessing what the Yankees will do in the offseason to improve the team.  First, though, I am going to take a much-needed break for a few days and get back to the rest of my life.  I'll be back when I'm back.
Posted by Unknown at 10:31 AM No comments: