Second Half Turnaround On The Horizon For Mason Williams 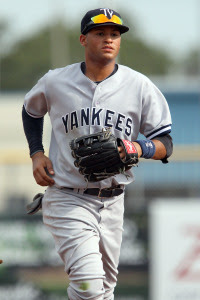 It’s been a trying season for top prospect Mason Williams. There was his DUI arrest in late April, a slow start at the plate after that carried over into the early part of June, and questions about his attitude and hustle popping up again in scouting reports. He’s missed games both due to minor injuries and undisclosed team reasons this season, and as recently as a month ago had a season OPS in the mid-600s. Since about the middle of June, however, Williams has started to find himself at the plate and is currently in the middle of a pretty wicked 2-week hot streak. He got knocked off track early, but Williams now appears primed for a strong finish to his 2013. 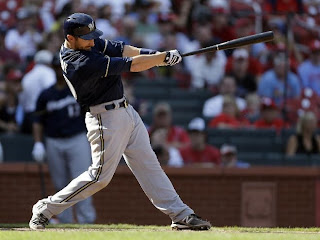 (Love me some Lucroy.  Courtesy of the AP)

The past 3 days have been spent on the realistic parts of the Yankee deadline position.  We know what they have, we know what they need, we know who they're after, and we know what stories are out there right now.  There's not much more to do about that other than watch it play out and hope Cash can pull off some magic, so why not expand the mind a bit and think outside the box of trade reality?  There are some higher-profile players out there who would be even better additions for the Yankees now and for the future than the players already discussed this week.  If Cash wanted to get bold, and the other GMs were willing to listen, here are some big swings the Yanks could take to try to really upgrade their team.

The Yankees resume their regular season tomorrow night and they'll start it deep in enemy territory with a 3-game weekend series in Bahhhston.  At 51-44, they currently sit 4th in the AL East , 6 games behind the Sawx (5 in the loss column) and 3 games behind both the Texas Rangers and Tampa Bay Rays for the Wild Card.  As luck would have it, the Yanks play their first 10 games of the second half against those 3 teams in what could be the make-or-break stretch for their postseason hopes.

After Baahhhston, the Yanks will travel to Texas for 4 before heading right back east for a 3-game home set against Tampa.  Then it's travel off day to the West Coast, 2 games against the Dodgers, travel off day, 3 at San Diego, 3 at the White Sox, travel off day, and 3 back at home against the Tigers.  21 games, 15 on the road, the first 10 against the 3 teams they're chasing in the playoff race, and the final 3 against the reigning AL champs.  The extra off days are nice, but that's still a tough stretch.  There's the soft underbelly of the 6 against the Padres and White Sox, but after going 3-4 against KC and Minnesota last week even those games can't be called gimmes anymore.

The end of this first second half stretch will bring the Yankees to August 12th.  The trade deadline will pass in that span, and perhaps a player or 2 will return from the DL.  By that Monday, we should know if the Yankees are serious postseason contenders or packing up the tents for the season.  They don't necessarily have to gain a ton of ground in the next 3 weeks, but they can't afford to lose much more.

Posted by Unknown at 8:25 AM No comments: