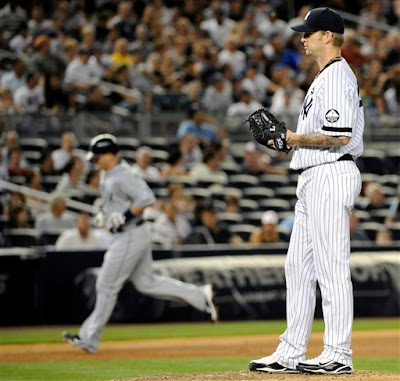 (Photo of the worst pitcher on the Yankees courtesy of The AP)
Oh yeah, that's right.  Boo.  Booooooo.

And if you're keeping score at home, here's the updated list of pitchers the Yankees can't hit:

What would you set the over/under at for Yankee hits off King Felix tonight?  3?  4?  Seeing as how he completely dominated the lineup last time and the lineup for the Yankees tonight will probably be not as potent as last time with The Horse and Berkman on the bench, I'd say 4 would be kind.

That being said, I'm rolling with the punches and taking the over on my self-made line.  Call me crazy, but I see some hits and some walks and even a couple runs in the cards for the Bombers tonight.  This is probably why I don't gamble...
Posted by Unknown at 2:15 PM No comments:

A Little Love For Phil Hughes 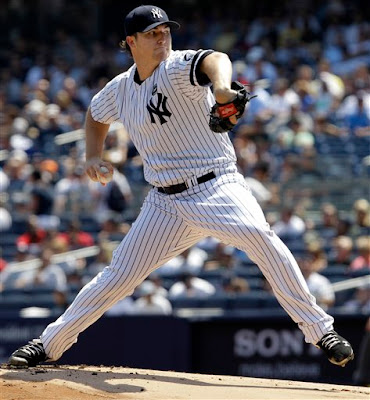 (Photo courtesy of The AP)
Phil Hughes started the season hotter than any other pitcher in the game and continued that good pitching through May.  However, he struggled through June and July and since then people seem to have just passed him over as a young guy with an innings limit who still has a lot to learn.  Under the radar of all this "Phil Hughes still has a lot to work on" talk is the fact that Hughes has been very good in his last 5 starts dating back to his 3-2 loss to Tampa on July 30.  Hughes continued his recent solid streak yesterday, going 6 innings of 4-hit, 2-run, 0-walk, 6-K ball to pick up his 15th win of the season.

Given that 40% of the Yankee rotation has been an all-or-nothing crapshoot this year thanks to the A.J.-Javy combo, and the guy who had arguably been their best pitcher all season could be out until the end of September, I think there needs to be a little more appreciation given to Hughes for the job he has done this year.  Let's not forget that Hughes wasn't expected to do much more this season than provide innings as a 5th starter and gain experience to eventually replace either Vazquez a/o Pettitte in the rotation in 2011.  Instead, Hughes has been one of the 10-15 best pitchers in the AL and probably the 2nd best pitcher in the Yankee rotation given his overall consistency and health.  Here's proof:

- Hughes is 15-5 in his 23 starts this year, the Yankees have won 17 of his 23 starts overall.  On top of that, Hughes has lost 3-2 to Tampa, 2-1 to Boston, and got a no decision in a game against Baltimore in April when he allowed only 1 run over 5.2 innings.  If the Yanks pick up a handful of runs in those outings, Hughes is sitting 18-3 right now with the Yanks going 20-3 over all his starts.

- Hughes has given the Yankees max value for the money they are paying him this year.  13 quality starts out of 23 and 15 wins for a 2010 salary of $447,000, which comes out to $29,800 per win, certainly a better ratio than what the Steinbrenners are paying A.J. and Javy per win and certainly better than what the Red Sox are paying Josh Beckett and John Lackey for their performances this year.

- Hughes' WHIP of 1.21 is 18th in the AL and lower than the WHIPs of other pitchers like Justin Verlander, Francisco Liriano, Ricky Romero, AL Cy Young favorite David Price, and teammate CC Sabathia.

- After giving up 11 walks in his first 3 starts, Hughes has allowed just 27 walks over his last 20 starts, comprising 122.2 innings and coming out to just 1.98 BB/9.  Combine that total with his 116 strikeouts and his K/BB ratio for the season is 3.05/1, better than that of guys like Jon Lester, Clay Buchholz, Trevor Cahill, and Matt Garza.

Let's not forget that this is coming from a guy who is still one of the youngest players in the AL at 24 and came into Spring Training in an open competition to become the 5th starter.  After winning the competition, I would bet the Yankees would have been ecstatic to get league average production from Hughes.  Instead he has stepped up in the face of the Yankees' rotation problems, his innings limit, his own injury history, and his lack of experience as a full-time Major League-level starter to basically be the Yankees' #3 and now #2 starter.

Good job, Phil.  Damn good job.  I don't know where we'd be without you this season.
Posted by Unknown at 10:06 AM No comments: