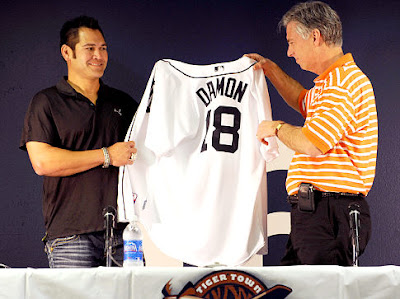 Johnny Damon in the summer of '09:

“I don’t know where else I would want to go to. Obviously, that’s not the right thing to say when you’re about ready to approach free agency, but I’m very happy with playing in New York, and my family’s happy I play for New York. There’s no bigger place to go. If you play well here, you’re going to get paid. New York has the resources. But we also have the chance to win every year. I don’t want to attempt to go make more money elsewhere, for more years, with a chance to be out of the race by the first of June." (courtesy of the NY Times)

Johnny Damon yesterday at his introductory press conference in Detroit:

“This is where we wanted to be. It is where my family wanted to be. Contrary to what has been reported, I wanted a place where I could win right away. I have always been truthful and Detroit was always my first choice, and my wife and I are going to love it there.”
“This isn’t the same market we lived in years ago. I told Scott that Detroit was No. 1.”
“I feel like I belong here. It took a little while, but I probably felt like I was a Tiger a month and a half ago. I really feel good about this.” (courtesy of MLB.com)

Well there you have it, folks. As if there was any doubt left that Johnny Damon was the prototypical Scott Boras client, those 2 polar opposite quotes do everything to wipe away that doubt.

Damon can say whatever he wants to say, and of course you would expect him to say something similar to what he said yesterday because nobody is going to go to their first press conference with their new team and say they hate it here and this city is a piece of shit. But the fact of the matter is Johnny Damon is a two-faced slimeball whose sole motivation throughout his entire career has been to go wherever he and Scotty B believe the most money is. He followed the same path that A-Rod did when Boras led him down the shitty contract negotiation trail in 2007, the only difference being A-Rod was smart enough to realize that that plan wasn't going to work out and Damon was dumb enough to follow Boras, and his horrible plan, right into Motown.

It shocks and impresses me that Damon can talk so well out of both sides of his mouth, given his past stuttering and stammering problems, so I do have to hand that to him. But if he thinks he's fooling anybody with the jet spray of bullshit that he spewed yesterday, he's dead wrong. Christ, I bet he couldn't even convince himself that he believed what he was saying.

Damon's words yesterday were those of a broken, beaten man who realized far too late the mistake he had made and is now starting to realize how he will pay for it this year. Like I and everybody else have been saying all along: if Damon truly wanted to be a Yankee today, he would be. Now he's stuck in Detroit playing on a team that very may well be out of the playoff race in June or July and the Yankees are just as strong in the outfield without him and gearing up for a run at defending their title.

Good luck this year, John. Hope the $8 million was worth it. 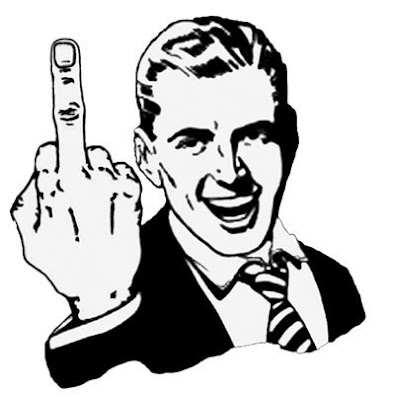 And if you want to get an even bigger laugh out of Damon's nonsense, The Yankee U has a great collection of Damon quotes tracing his two-sided comments all the way back to 2005.
Posted by Unknown at 12:40 PM No comments: