Guess the thumb injury wasn't that bad as Teix is back in tonight.  That's good news.  But where the F is Eduardo Nunez??  I haven't seen anything indicating he's hurt and I know a young buck like him doesn't need a day off.  Get his bat out there, Joe!  Don't turn the 9-spot into an automatic out just because you can.
Posted by Unknown at 3:58 PM No comments:

Here's this week's updated Top 25 Roster Poll.  Lots of changes after last week.  Bold indicates all players who moved up or down in the rankings from last week.

Also Receiving Votes:
26) Andy Pettitte (injury status improving)
27) Lance Berkman (rehabbing in Trenton this week)
28) Alfredo Aceves (struggled in last 2 rehab outings)
29) Chad Gaudin (most likely won't be on team when everybody is healthy)
30) Damaso Marte (due to injury status)
Posted by Unknown at 11:19 AM No comments:

This Ain't No Rookie Sh!t 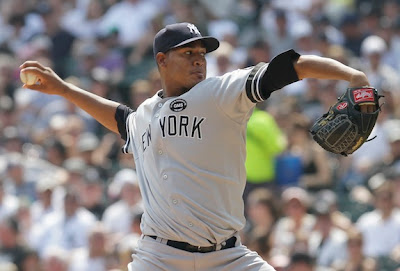 (Photo courtesy of The AP)
That's essentially what Ivan Nova said to the world and the Chicago White Sox yesterday with his performance.  In only his second career Major League start, Nova carried himself like a seasoned veteran on the mound, pitching with poise and confidence beyond his years, using all 4 of his pitches effectively, and attacking the White Sox hitters.  He may be only 23 years old, but he sure doesn't pitch like a rookie.

Somebody should probably also remind Joe of that fact, as he decided to take Nova out early again, this time after only 88 pitches.  Joe said after the game that it looked like Nova was starting to get up in the zone so he made the call to remove him with the lead intact.  But he had just allowed one baserunner and there were 2 outs, why not give the kid a chance to get out of the inning?

Last time I checked, the Yanks were still deadlocked with Tampa for the division lead and their rotation, while not in complete shambles, wasn't the dominating force it was earlier in the year.  As a manager, your decisions should be based on what gives the team the best chance to win, not on how concerned you are about a young pitcher's ability to get out of a relatively low-leverage situation.  Yesterday Nova gave the Yankees the best chance to win and he should have been allowed to get out of the inning.  He wasn't struggling, wasn't losing command or velocity, and didn't have a high pitch count, so let the kid fucking pitch!  Thankfully the Boone Logan-Kerry Wood combo didn't completely screw the pooch after loading the bases.

Joe did say after the game that Nova will stay in the rotation for his next start, and given the continued struggles of A.J. and Javy, he could very well earn a postseason roster spot.  Now is the time to find out what he can really do in a pressure situation.  So far Nova hasn't pitched like a rookie, so he shouldn't be treated like one.  It ain't no rookie shit indeed.
Posted by Unknown at 7:50 AM No comments: