The Jesus had ankle surgery???  For an infection???  How in his father's name does that happen???  He's The Almighty, The Savior, The Chosen One.  Regular human injuries should not even happen to his celestial, otherworldly body.  And if they do, one would think that The Jesus could just heal himself, no?

Light a candle and say a prayer tonight for The Almighty, Yankee fans.  He needs our love and faith now more than ever. 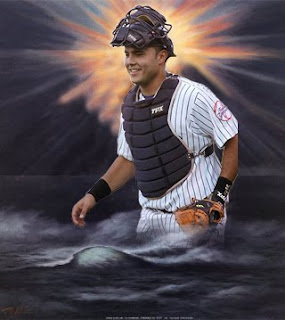 Get well soon, sweet prince.  Rest and heal and return in 2011 ready to begin your legacy.
Posted by Unknown at 4:29 PM No comments:

Chad from LoHud had an interesting piece yesterday about all the questions facing the Yankees as they head towards the postseason, and there are plenty of them.  Being the helpful guy that I am and seeing as how I was spot on with pretty much everything playoff-related last year (check the posts from last October and November if you don't believe me), I decided I would answer those questions today.  Here we go...

ROTATION
Big decision: Who else gets a start in the playoffs?

- Andy Pettitte will most certainly get a start as long as he stays healthy upon his return to the rotation.  A.J. will most likely get one just because he's making $16.5 million this year and he has the experience.  And as long as he doesn't start to show significant effects of his increased workload this year, Phil Hughes will be the 4th starter.

Smaller decisions:
• How do the starters lineup after Sabathia?

- The starters should line up Hughes for Game 2, Pettitte for Game 3, and A.J. for Game 4.  That gives the Yanks the best chance to win a short series and at least come out up 2-1 heading to a Game 4 while keeping their most volatile and unpredictable starter off the mound for as long as possible.  But they will, in all likelihood, line up A.J., Andy, Phil.

• How much consideration does Ivan Nova get?

- Unless any of the previously-mentioned 4 get hurt, Nova won't get much consideration even though he should.  Seeing how Joe has managed him so far, and seeing how he's managed A.J. throughout the season, I don't see Joe giving Nova a shot over A.J., regardless of how shitty A.J. may pitch down the stretch.  Nova would be a good option against any of the teams the Yanks will face in the playoffs because none of them will have seen him more than once if at all, but knowing Joe I just don't see it happening.

LINEUP
Big decision: Is Brett Gardner still the No. 9 hitter?

- Yes he is.  Even though he probably shouldn't be.  Gardner is obviously a better choice for the leadoff spot than Jeter, but again, unless Jeter gets hurt Joe is never going to take him out of the leadoff spot.  The best lineup would be Gardner, Jeter, Teix, A-Horse, Cano, Swish, Jorge, Berkman/Thames, C-Grand, but Joe's loyalty to Jeter and unwillingness to do anything that could be seen as an insult to Jeter will prevent that lineup from ever seeing a lineup card.

Smaller decisions:
• Does Marcus Thames get any DH consideration against right-handed pitchers?

- If he continues to produce then he certainly should.  Thames' tripleslash against righties this year, while not as good as his numbers against lefties, is nothing to sneeze at.  Joe is already working on riding the hot hand and trying to get Thames ABs however he can now.  If Thames stays hot, he can't be ignored as the ideal DH option no matter what hand the opposing pitcher is throwing with.

• Is Austin Kearns an automatic starter against left-handers?

- No, and he shouldn't be.  C-Grand has been much better against righties and lefties since working with Kevin Long and the fact of the matter is he's a better player across the board than Kearns.  Going into the playoffs, the outfield should be set with Gardner, Grand, and Swish.  If Granderson does struggle against lefties then Kearns becomes a bigger possibility, but in no way should he be considered an automatic starter.

• Is there any chance Jorge Posada catches A.J. Burnett?

- Chad didn't think so, but I say hell yes to this.  With the extra off-days that come with the postseason, Jorge has more time to rest his bumps and bruises.  And with the way Cervelli has hit since May, the Yankees can't afford to sacrifice a more productive bat for his just to make A.J. feel warm and fuzzy out on the mound.  It's put up or shut up time for A.J., and if the Yanks are facing a must-win game with him on the mound they need their best lineup out there.  That means Jorge and his bat behind the plate and Frankie and his bat on the bench.

• Is there any reason to give Alex Rodriguez or Derek Jeter a day off?

- Not unless they absolutely need it.  See the logic above for Jorge.  Extra off-days in the schedule means free off-days for the old guys.  The postseason isn't the time to rest, it's the time to win.  You manage your players' off-days accordingly during the end of the regular season so you can ride them to a title in the postseason.  Period.

BULLPEN
Big decision: Who fills the back of the bullpen?

- Like Chad said in his post, Mo, Wood, D-Rob, Joba, and Boone Logan are shoo-ins.  I think the Yanks are taking 12 pitchers, so with the 4 starters locked in that leaves 3 spots.  Sergio Mitre should and will be the long man with Ace on the shelf, and Javy will make the roster just because of who he is and how much he's making.  The last spot should go to Nova, but with Mitre and Javy the Yanks will have 2 guys who can go long innings if needed.  With that in mind, don't be surprised to see Jon Albaladejo take the 12th spot if he pitches like he did all year in Triple-A for the rest of the season.

Smaller decisions:
• Do the Yankees need a defined eighth-inning guy?

- Hell no.  As a matter of fact, I wouldn't mind them using any of the 4 they have setting up Mo right now for one batter at a time in the playoffs just to keep the other team on their toes.  The beauty of having Wood, D-Rob, Joba, and Boone Logan available is that it gives them options for any situation that could crop up in the 7th and 8th innings of close games.  Not to mention Joe will be more willing to use Mo for more than 3 outs if he has to.  I get on Joe all the time for how he micromanages the 'pen, but the mixing and matching has been working for a while and with all these guys dealing right now there's no reason to change the formula come playoff time.

• Does someone take the Gaudin role?

- See: "Mitre, Sergio" or "Vazquez, Javier" if the Yanks are really in a pinch.

BENCH
Big decision: Is there room for a fifth bench player?

- As long as everybody is healthy then no, and there shouldn't be.  Pitching is what wins in the postseason and it's why the Yankees won the title last year, not because they had Freddy Guzman on the bench.  Cervelli is your backup catcher, Kearns is your 4th outfielder, Thames is your one-man wrecking crew, and either Pena or Nunez is your utility infielder.  Combine that with the flexibility that Swish and Gardner provide in the field and you're covered for every conceivable scenario.

Smaller decisions:• If there’s room for only one, which utility infielder makes the roster?

- Smart money would be on Ramiro Pena.  Nunez has shown flashes since being called up, and he is a better hitter than Pena, but I don't think he's shown enough to supplant Pena from his spot.  Pena is the better glove and has more experience, which always factors into managers' decision making come playoff time.

• Is there something about the individual matchup that affects the bench?

- No.  Like I said before, the Yankees are covered for every possible scenario.  You want your 25 best guys for the playoffs so there's no sense in trying to get cute and add a speedy runner or another lefty bat or something quirky like that at the expense of a better overall player.

• If they do carry a pinch runner, is Golson or Nunez a better bet?

- Nunez.  He's already had some Major League success and is more of an asset in the field and at the plate than Golson would be if he had to stay in the game.  Nunez would provide better defense if he ran for A-Rod whereas Golson subbing for any of the regular outfielders is almost a wash while also being a downgrade from any of them at the plate.

Posted by Unknown at 1:12 PM No comments: 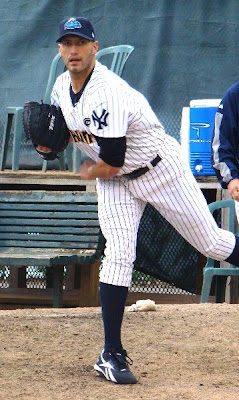 (Photo used courtesy of Mike Ashmore)
He looks a little old to still be in Double-A, but this Pettitte guy looked pretty damn good to me last night.

4 shutout innings, only 2 hits allowed, no walks, and 4 Ks.  That'll get the job done 25 hours a day, 8 days a week.  His fastball lived in the high-80s, but he can locate it well to both sides of the plate, and his cutter and curveball can also both be thrown anywhere at any time to induce weak grounders and swings and misses.

It was the first I've heard of this Pettitte character pitching for Trenton this year, but something tells me if he keeps pitching like that he's definitely got a future in the Yankee organization.
Posted by Unknown at 9:36 AM No comments: