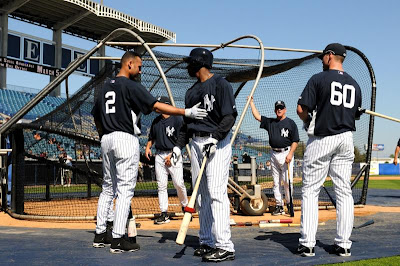 After making it back to the promised land and winning the World Series last year, the Yankees enter 2010 minus a few familiar faces and plus a few new (and old) ones. The 2 biggest departures were from the starting lineup in the form of Johnny Damon and Hideki Matsui. But through a trade and a cash-friendly free agent signing, the Yanks were able to re-tool the lineup for this season and should sport a group potentially just as potent, if not more so, than last year's model. Here's how it breaks down:

Catcher: One position that had no turnover was behind the plate, where the Yankees will open another season with their unquestioned clubhouse leader, Jorge Posada, manning the dish. At an age where most catchers are taking positions in the broadcast booth or simply being taken out behind the old barn and shot, Jorge continues to put up solid offensive numbers, a true testament to just how tough and talented a player he is.

Jorge's decline is expected to take a more steep, dramatic turn this season and the Yankees have planned accordingly to try to limit his games behind the plate. Even with the decline and fewer at-bats, Posada should put up above-average numbers from the catcher position and the Yankees will work to keep his bat in the lineup as much as possible. His defense is a weakness, but it was never a strength to begin with, so as long as he continues to gel with A.J. Burnett and call a good game for the pitching staff, the Yanks will take the good with the bad and look forward to getting another productive season from Jorge in what could be his last as a full-time catcher.

Designated Hitter: The Yanks go from a slow, oft-injured, patient hitter with streaky power in 2009 to a slower, more often-injured, more patient hitter with even streakier power in 2010. Nick Johnson isn't new to the bright lights of the Bronx, and since leaving New York in 2003 he has proven himself to be one of the most patient hitters in the game. With Johnson, the Yankees know exactly what they're getting, the only question is how much of it will they get if Johnson spends a lot of the season on the DL.

Johnson's all-world eye at the plate makes him an ideal candidate to bat 2nd, which is exactly where the Yankees plan to use him. Kevin Long has already worked on tweaking his swing to build more leg drive into it, which should help increase Johnson's power and allow him to take advantage of the short porch in right field. He has next to no speed on the basepaths, but with the 2 mashers hitting behind him, there should be enough balls sailing into the gaps and over the fence to lessen the worry about Nick The Not Quick clogging the bases. If he stays healthy, and that is a BIG if, Johnson can easily replicate the production the Yankees got from Godzilla last season.

Infield: After putting up pretty spiffy numbers across the board last season, the Yankee infield is poised to have an even bigger year in 2010. Between Teix now being more comfortable and adjusted to New York, A-Rod's hip being back to full health, Cano being another year older and hopefully more mature, and Jeter just being Derek Jeter, the Yankee infield has the potential to put up historic numbers this season and make a case for "Best Infield of All-Time" status.

Teix had an MVP-caliber year in '09 and if he can avoid repeating the horrid April he had last year, his numbers could be even better this season; I'm talking .300/40/135-territory here. Throw in the fact that he's the best defensive first baseman in the game and that's really all you need to say about him.

Despite the steroid scandal and the hip surgery, The A-Horse still managed to hit 30 homers and drive in 100 runs last year playing on one leg. He followed that up with a monster postseason that erased all the talk of him being a choke artist and now he comes into 2010 with his hip back to 100% and his mind just as clear and carefree as it was last year. A-Rod has been mashing the ball of late this spring and all indications are he is heading back to more A-Rodian territory in the stats department, which could make the MVP debates this season even more intriguing.

The wild card in this 3-4-5 lineup trio is Cano. After years of putting up really good but not great numbers, 2010 is the year Cano is being looked at to finally put it all together and have the type of season everyone believes he is capable of. He is being given a big opportunity/responsibility as the 5th hitter in the order, and should get plenty of chances to shed his growing "can't hit in the clutch" label by hitting behind A-Rod. Cano has also been scalding the ball this spring, a good sign for someone who has been a notoriously slow starter his entire career. If Cano stays focused and a little more patient at the plate all season long, he could easily drive in 100-110 runs and compete for a Gold Glove. The toolbox is full, the foundation is set, now it's time for Cano to start putting the tools to work.

Last but not least is El Capitan, Derek Jeter. There isn't much to debate or guess about when it comes to Jeter. At this stage in his career, you know what you're going to get from him. With age starting to factor into his performance a bit, I don't expect Jeter to replicate last season's numbers offensively or defensively, but he should still produce at an above-average level and set the table for the heart of the order. Another .300+-average, 200+-hit, 100+-run season is not out of the question as he plays for his new contract.

Outfield: It's not quite a complete changeover from '09, but with the Granderson-Gardner duo replacing Damon-Melky, there will certainly be a new look to the Yankee outfield, a look that should result in better defense thanks to improved speed and arm strength in left and center.

Brett Gardner will start the season in left, but could see some time in center as the season progresses. He is still a bit of an unknown commodity and the Yanks signing Randy Winn and Marcus Thames is a sign of their questioning whether or not Gardner can be a productive full-time player. Defensively he is a whizz in outfield and will help a staff chock full of flyball pitchers. Offensively he doesn't have a lot of pop, but makes up for that with his blinding speed. When he is on base, Gardner can create havoc for the opposing team, and he has been working on his bunting this spring to maximize the value of that speed. Being fully recovered from last year's wrist injury should also help improve his hitting. Personally, I think Gardner is underrated and will end up being very productive this year from the 9-spot, but only time will tell.

Curtis Granderson takes over in center field and even at his worst he is an upgrade over Melky Cabrera. The 2 biggest questions about C-Grand were his route taking in the outfield and his ability to hit lefty pitching. So far this spring he has looked better than advertised in both of those departments, and working all year with Kevin Long should lead to continued improvement at the plate. Granderson cracked 30 homers last year and could hit even more in the right field jet stream at the new Stadium. I expect him to have a solid season and endear himself to the Yankee fans the same way Damon did during his time in Pinstripes.

The one holdover from last year is Nick Swisher in right. Last year, Swishalicious' production made him a steal with what the Yankees gave up to get him, and he has already worked with Kevin Long in the offseason to improve his swing and up his average this year. I don't expect another 29 homers and 82 RBIs from Swish in 2010, but he should still put up very good numbers from the 8-spot and play above-average right field. His patience at the plate should help Gardner in the 9-spot and create problems for opponents as walks will allow the lineup to turn back over to Jeter and Johnson at the top.

I just jizzed a little in my pants looking at that. My guess is most AL pitchers pooped in their's.
Posted by Unknown at 9:26 AM No comments: