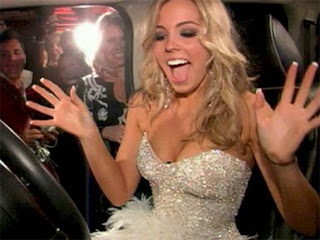 To the site!!!  I almost completely forgot but instead I'm just one day late in wishing myself and the blog a happy first birthday.

We started off a little over a year ago with this beauty of an opening post in which I completely botched Rick Porcello's name (seriously, Matt Porcello??  Who the fuck is that?) and it's been all uphill from there.  Over the last year I'd like to think we've brought something to the table in the Yankee blogosphere world, whether it be high-quality, pretty hilarious Photoshops thanks to the incomparable Swanny Duckson, spot-on predictions and occasional solid analysis, rants on any topic that may or may not have been fueled by too much alcohol, or just finding a reason to reference Alec Baldwin's "Always Be Closing" speech from "Glenngary Glen Ross."

I hope I've been able to entertain and educate some of you dear readers out there, and if I haven't, well then you can fuck off and I guess I can live with that.  We sure as shit aren't closing up shop anytime soon around here, especially not with another postseason and title 28 right around the corner, so if you haven't done it already, get used to us.

In all seriousness, thanks out there to everybody who has read and commented and linked us so far.  It's stuff like that that makes this pseudo-job worth doing and I look forward to continuing to churn out our brand of low-brow, profanity-laced, Hughes-loving, Joba-hating, Red Sox-bashing Yankee goodness as we at AB4AR head toward our Terrible 2's.
Posted by Unknown at 2:40 PM No comments: 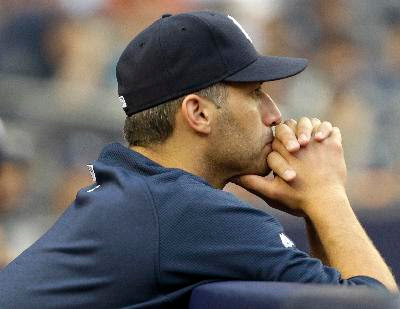 (Photo courtesy of The AP)
Phil Hughes sucked last Thursday night, A.J. sucked on Friday night, CC was "meh" on Saturday, Ivan Nova rocked it on Sunday, Moseley wasn't very good last night, Andy is progressing well after his latest bullpen session, and in the middle of all of that Javy had 2 solid if not spectacular outings out of the bullpen after losing his spot in the rotation.

The regular season is winding down and the Yankee rotation that was its greatest strength for the first half of the season has no become the biggest question mark as the Bombers stare down the barrel of the postseason.  With all that has happened in the last week, there are all kinds of questions and theories and possibilities being thrown around as to who is going to be in the rotation for the rest of the year, who is out, who is taking this guy's place, how many starts he's getting, etc.  And all those theories and possibilities change by the day after each game.

Right now, here is what we know:

1) CC is a beast, even if he was un-CC in his last start.  He still held the lead when the team got it, he still gave them length, and he's as sure a thing as you can have on the mound for the rest of the regular season and going into the postseason.  He's exactly what every team wants from their ace.

2) A.J. Burnett has completely lost it.  He can't locate his pitches and his mental state is probably somewhere between Private Pyle in "Full Metal Jacket" and Nicolas Cage's character in "Leaving Las Vegas."  He is the weakest link in the rotation right now, but will still get the start on Wednesday.

3) Phil Hughes had arguably his worst outing of the season last time out, but has still pitched relatively well before that.  But he is inching closer to his innings limit for the season, and the Yankees seem fully committed to not pushing him over that, at least for the regular season.

4) Javy Vazquez is starting to look better after being banished to the 'pen and making an adjustment with Dave Eiland on his leg kick in his delivery.  He's back to touching 90 on the gun with his fastball and is locating it much better than he had been all month.

5) Dustin Moseley is what he is.  Nothing about his stuff makes you do a double take, so when he can locate he can be effective and when he can't he has outings like last night.  He was really only plugged in as a replacement for Pettitte, and if Javy and A.J. were pitching better he more than likely wouldn't be in the rotation now with the emergence of Ivan Nova.

6) Ivan Nova will get at least one more start, this weekend against the Blue Jays, and he has definitely earned it.  He has pitched with poise and great stuff on the mound and has given Joe no choice but to keep him in the rotation while the others continue to struggle.

And here is what we don't know:

1) Whether or not A.J.'s spot in the rotation will still be his after Wednesday.  Joe was visibly frustrated after Friday night and his "evaluation" comments certainly put the writing on the wall for A.J.

2) Who will be taking A.J.'s spot in the rotation if he bombs on Wednesday.  It would most likely be Javy, but you never know.

3) How the rest of Andy's rehab will go and when he'll actually return to the rotation.  Right now, the early prediction is in 2 weeks, but a lot could happen between now and then, especially for a 38-year-old guy who's not on HGH anymore (as far as we know).

4) Joe's plan for Nova beyond this weekend.  With the continued struggles of A.J., Javy, and Moseley, and the recent bad outing by Hughes, logic would dictate that Nova stays in the rotation as long as he continues to pitch well, but so far nothing has been committed to him beyond his next start.

5) Who is getting booted from the rotation if and when Andy comes back.  The smart money would be on Moseley, but if A.J. continues to suck Joe is going to have a tough choice to make, even tougher if Nova continues to dazzle.

The plans for Andy and what will come as a result are too far down the road to accurately predict right now, but I think some of this picture will start to clear up over the next 2 days with Phil and A.J.'s next starts.  If Phil gets back on the right track, I would say his spot is safe for the rest of the year (even if they have to shorten him up and get creative with the 'pen to manage his innings) and he probably guarantees himself a spot in the postseason rotation.  If A.J. gets it together, he will stay in the rotation for the time being but still be on a short leash.  If he fucks up again, he could be kicked out in favor of Javy.  If either one of them struggles, it could signal another start for Nova regardless of what he does this weekend.

How's That For The Heart Of The Order?

That's not even being the heart of the order.  That's more like being the heart, lungs, liver, and kidneys of the order.  You expect it from Teix, even if he was coming back from a minor injury.  But if Cano and Swish continue to produce like this in run-producing roles, maybe Joe will have to consider hitting The Horse 6th when he comes back to the lineup (I know, I know. Blasphemy!!)

Marcus Thames picking up a homer in his 5th straight start doesn't hurt either.
Posted by Unknown at 7:29 AM No comments: