The Newest Member Of The AB4AR Photoshop Club 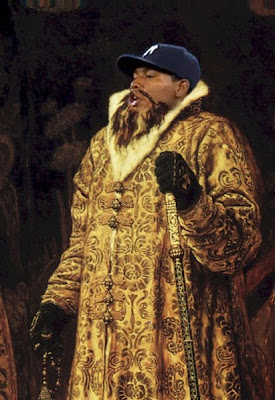 He'll work out of bases-loaded jams with ease.  He'll throw consecutive changeups and get you to swing and miss at both of them.  He'll come up and in on you after you grandstand a home run a little too long and then talk shit to you.  And he might even kill his son by whacking him across the head with his staff.

And if you don't get that last reference, click this link here and learn something.  We're not just about goofy Photoshops and bullshit here at AB4AR.  We're also about education.
Posted by Unknown at 4:12 PM No comments:

The Happiest I've Ever Been After A Loss

It's never good to lose when you're in the middle of a tight pennant race, but considering everything that went with last night's game, I'm not too upset.

For starters, there was no Jeter, no A-Rod, and no Kearns in the lineup, so the 7-8-9 hitters were Eduardo Nunez, Ramiro Pena, and Frankie Cervelli.  Not exactly Murderer's Row there.

Secondly, with a lineup like that and Brandon Morrow pitching like he was last night, the Yankees weren't going to score a lot of runs.

Thirdly, D-Rob was bound to have a hiccup sooner or later.  It was just bad luck that it happened in a low-scoring tie game.  These things happen.  No reason to start freaking out about him or the bullpen again.

And lastly, Ivan Nova was very impressive last night.  After loading the bases to start the game, he worked out of that first-inning jam without allowing a run, and then worked 5.1 innings of 2-run ball against a very dangerous lineup.  He made one bad mistake to Jose Bautista, something that plenty of other pitchers have done this year, and he paid for it.  But his stuff looked good, his composure was there, and if it weren't for Joe inexplicably removing him after only 73 pitches his line could have ended up looking even better.

Even more important than that, though, was the up-and-in job on Bautista in his next at-bat after the home run.  I fucking loved that.  Bautista got a little animated with his bat flip, Nova didn't appreciate it, and he let Bautista know about it.  And the pitch really wasn't all that close to Bautista; it brought back memories of the Clemens-Manny high and tight pitch from the playoffs years back.  Bautista overreacted just like Manny did and Nova didn't back down.  Throwing the pitch in the first place and then standing up to the guy are ballsy moves for a young pitcher making his first career start and I absolutely loved it.  That move alone should guarantee Nova a spot in the rotation for the rest of the year and in 2011.  Kid is a fucking gamer, no doubt about it.

So yeah, the Yanks lost, but I feel good about things moving forward.  The lineup should look better tonight, the bullpen is still pitching well.  It's all good.

** Update- 11:54AM: Fifthly, the umps were fucking awful last night.  Not much you can do when you aren't getting calls.**
Posted by Unknown at 9:57 AM No comments: