These are never words you want to hear from your manager when describing a pitcher's side session leading up to a potential rehab start:

Unfortunately for Yankee fans, those are the words coming from Joe's mouth today after Phil Hughes' session was cut short after a few pitches because his arm had no life and his pitches had no stuff.  The rehab start is obviously off and Hughes' return to the rotation now becomes a big fat question mark.

A few weeks ago, when I was discussing the situation, I said that a plan needed to be made to address Hughes' problem and "if it means going out in the 'pen during his side sessions and getting a gun on him while he tries to correct the mechanical flaws, the fine.  That's a solid starting point.  But if that doesn't help, then medical solutions need to be looked at, be they MRIs, scopes, rest, whatever."  Well I think it's safe to say that after today's results, it's time for the MRIs, the scopes, the rest, and whatever because throwing isn't working.

In the mean time, let's all keep praying that Freddy and Bartolo can keep their 2005 resurrection going.
Posted by Unknown at 4:07 PM No comments:

Joe Broke All Kinds Of Bullpen Commandments (On Easter) 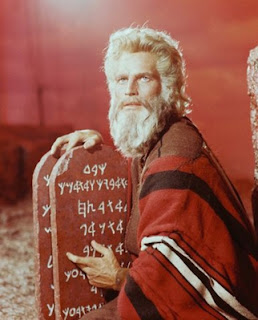 (He didn't carry them all the way down the mountain for you to break them, Joe)
There's nothing surprising about Joe Girardi making bad bullpen decisions.  In all honesty, it feels like he's made more bad ones than good ones since taking over as manager.  Maybe it's his backwards way of thinking when it comes to 'pen management, maybe it's the fear of getting second guessed if he thinks outside the box, maybe it just comes with being a guy named "Joe" who manages the Yankees.  We all know the last one wasn't a bullpen genius either.  Whatever the case, I've come to expect the worst when it comes to bullpen decisions from Joe and yesterday was no exception.  But to commit that many bullpen atrocities on Easter Sunday?  That's practically grounds for excommunication from humanity.  5 commandments broken in just a few hours.  5!!  Let's review them.

- Thou shalt not take thy veteran starter out of the game when he is pitching well and does not have a high pitch count.

Just in case anybody has forgotten, Freddy Garcia was on the mound yesterday.  Not Manny Banuelos or Dellin Betances or some other young guy who is having his innings and pitch count carefully monitored.  Freddy Garcia is a 12-year MLB veteran who should have no questions about his arm strength anymore.  If Joe was concerned about how little he had been used and that being a factor in his decision, then that's his fault for not using Garcia enough early in the year.  The Yankees didn't bring him in to pitch short innings, they brought him in to provide LENGTH.  And that's just what he was doing yesterday, to the tune of 6 dominant shutout innings.  When a 12-year veteran is giving you that kind of outing, you don't take him out until he shows signs of breaking down.

- Thou shalt let thine reliable relievers finish an inning, even if they get into trouble.

Dave Robertson has been lights out this year.  Dave Robertson was called in to pitch the 8th inning because Sour Puss was unavailable.  Dave Robertson gave up 2 hits in the 8th inning yesterday, but had also gotten 2 outs and hadn't allowed any runs when Joe decided to pull him.  Luke Scott was coming to the plate.  There was no reason to take D-Rob out of the game in that situation.  Relievers are going to give up hits, it happens.  As long as they don't give up runs and hold the lead, who cares how they get there?  Luke Scott isn't exactly a world beater down at the bottom of the Baltimore lineup, and D-Rob is tough against lefties.  If you bring him in to pitch the 8th, let him pitch the 8th!!

- Thou shalt bring in thy lefty specialist when the situation calleth for it.

According to a LoHud postgame report, Joe decided to bring Mariano in to finish the 8th instead of Boone Logan because he didn't want to use Logan for just one batter.  ...  ...  Huh?  What???  That's what Boone Logan is there for!!!  he's a lefty specialist.  You bring him in specifically for situations like that: 2 on, 2 out, 1-run lead, lefty batter (Scott) at the plate.  Anything you get beyond that from Logan is gravy.  Now granted he provided a whole lot of gravy when he did get the call in the 10th and 11th, but to say you don't want to use your lefty specialist out of the 'pen to face a lefty because you don't want to use him for one batter is asinine.

- Thou shalt not bring in thy 41-year-old closer for a 4-out save in a game in April.

I know Joe's logic on this one.  It was a close game, we wanted to win, Mo was working on 4 days' rest.  But that still doesn't change the fact that he's already been used quite a bit this year, he was coming off a rough outing in which he threw more pitches than usual, and he's 41 freaking years old!!!  He doesn't need to be in a game for extra outs, throwing extra pitches in April!!  Now you've wasted another outing from him when he didn't have his best stuff and threw too many pitches and in turn wasted a chance to use him tonight or tomorrow because he threw so many pitches.  If Joe is Linus, then Mo is his security blanket.  The only problem is, Joe is squeezing the blanket too tight and ripping it.  Dude needs to let it go and trust his other pitchers.

- Thou shalt not have inconsistent different standards for thine reliable relievers.

Joba comes in in the 7th and gives up a 2-run homer, cutting a comfortable 3-run lead to a tight 1-run lead, yet he is allowed to finish the inning.  D-Rob comes in in the 8th, doesn't give up a single run, but gets yanked at the first perceived sign of trouble because he let 2 runners get on.  Boone Logan, a lefty specialist, is not desirable to come in and get 1 lefty batter out, but he's OK to use for 1+ innings against righties and lefties with a long rain delay in between?  Somewhere along the line, Joe needs to establish some consistency with these guys and stick to it.  There's no reason that D-Rob shouldn't be given the same length of leash as Joba, if not longer, given his results.

Let go of your pre-ordained plans, Joe.  Let go of your stupid roles, your stupid rules, and your stupid bullpen binder.  Trust your veteran starters to pitch well, and trust your middle relievers to get the job done holding leads.  If they don't, so be it.  It happens, everybody has a bad day.  But you have to at least give them the opportunity.  You put all your trust in Mo and even he cracks every now and then.  You need to have that same trust in the Jobas, D-Robs, and Boone Logans of the world for the bullpen to be successful.
Posted by Unknown at 9:02 AM No comments: