This Is What Happens When You Don't Listen To Joe Girardi 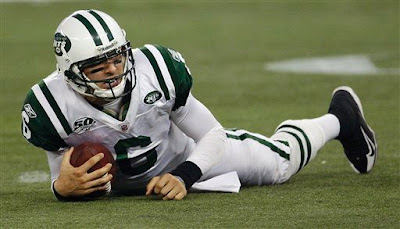 Initial tests revealed Jets quarterback Mark Sanchez has a sprained posterior cruciate ligament, and if he can handle the pain, he would be able to play Dec. 13 at Tampa, a source close to the situation told ESPN NFL Insider Adam Schefter on Friday morning

Sanchez sprained his right knee Thursday night in the Jets' 19-13 win against the Buffalo Bills in Toronto, when he dived headfirst on an 8-yard scamper up the middle.

That was enough to pick up a first down on the Jets' second possession of the third quarter. And it happened in the same week in which the Jets brought in Yankees manager Joe Girardi to provide the first-round draft pick sliding lessons after Sanchez hurt his left knee in a 17-6 win against Carolina on Sunday.

Jets coach Rex Ryan was visibly upset following the game, after having to watch Sanchez hobble off with a knee injury for the second time in five days.

"Sometimes, the kid's got to understand we're trying to teach him to slide," Ryan said. "I love the kid, but he's got to grow up and understand he represents our entire organization. We want what's best for him." (story courtesy of ESPN.com)

I never pegged Mark Sanchez as a Rhodes Scholar, but when your team puts in a call to Joe Girardi to teach you how to slide, you should probably take what he says as the word of God and burn those lessons into your brain like a hot poker.

This isn't some local Little League coach coming by telling you to make sure to not slide too late and keep your hands closed so you don't get stepped on, this is Joe F'ing Girardi, mastermind of the World Series Champion New York Yankees and the man that should have rightfully been AL Manager of the Year. When this guy speaks, you better damn well listen. But no, you decided you know what's up and you dive forward like a dumbass to get a first down and end up hurting your knee. Serves you right, jackass.

Sanchez should just be thankful that he has a clown like Rex Ryan as his coach and not Girardi himself. We've seen Joe bench Cano for not playing hard and yank pitchers early for blowing up on the mound. God knows what he would have done when he saw Sanchez lunging headfirst for the first down marker instead of executing the textbook pop-up slide that Girardi undoubtedly taught him. My guess is Sanchez would have had plenty of time to snack on some more hot dogs because he would have been riding the pine big time.

And where does Rex Ryan get off with this "we're trying to teach him to slide" garbage? Where does the "we" part come in, Rex? The version of the story out there is that you called Joe in to school young Sanchez, which says to me that whatever "we" you're referring to couldn't cut the mustard in the sliding department. If you're going to call in the Great Girardi, you better give him his due. It's his job to drop knowledge on your boy; it's your job to make sure he uses the knowledge.
Posted by Unknown at 4:35 PM No comments: