The day of things becoming official in Yankeeland continues as the team issued another press release today announcing that Jorge Posada will hold a press conference at Yankee Stadium tomorrow at 11AM to announce his retirement.

In honor of Jorge officially calling it a career, I'd like to go back into the AB4ARchives to find my 2 favorite Jorge-centric posts.  Those posts come from the earliest days of AB4AR, when the Yankees and Blue Jays engaged in their 2009 brawl.  The first one was my immediate reaction to the fight after watching ESPN engage in a full-on smear campaign against Jorge and the Yankees, and the second was another collection of thoughts I gathered throughout the day after the fight.  They were probably the first truly decent things I wrote for the blog and I have Jorge and his crazy competitiveness to thank for that, so thanks, Jorge. 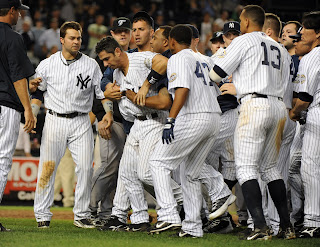 (When it takes someone's entire team to pull him away from a fight, you know that's a guy you should not fuck with.)﻿
Posted by Unknown at 7:08 PM No comments:

Guess everybody passed their physicals.  Here is the official press release from the Yankees on the Friday the 13th trade:

"The New York Yankees today announced they have acquired RHP Michael Pineda and RHP Jose Campos from the Seattle Mariners in exchange for C/DH Jesus Montero and RHP Hector Noesi.

Pineda, who turned 23 on January 18, went 9-10 with a 3.74 ERA (171.0 IP, 71 ER), 55 walks and 173 strikeouts in 28 starts with the Mariners in 2011 in his first Major League action. He finished fifth in American League Rookie of the Year Award voting, leading all AL rookies in strikeouts and strikeouts/9.0 IP (9.11), ranking second in innings pitched, opponents batting average (.211) and quality starts (19), tying for second in starts and ranking fourth in wins. He also held right-handed batters to a Major League-low .184 batting average (min. 225 batters faced).

The right-hander’s 173 strikeouts were the sixth-most by an AL rookie over the last 30 years and second-most all time by a Mariners rookie behind Mark Langston’s mark of 204 in 1984. Both his strikeout-to-walk ratio (3.15) and strikeouts/9.0IP mark (9.11) rank as second-highest all time by a qualifying AL rookie.

A native of Yaguate, D.R., Pineda was signed by Seattle as a non-drafted free agent on December 12, 2005. He was named the Mariners’ Pitcher of the Year in 2010 and was a finalist for the USA Today Minor League Player of the Year. He entered the 2011 season as the Mariners’ top pitching prospect (second overall), according to Baseball America, as well possessing the organization’s “Best Fastball” and “Best Slider.”

According to the Elias Sports Bureau, the last player to pitch with the Yankees at age 23 or younger after having already pitched for another Major League team was Mike Morgan, acquired by the Yankees from Oakland in exchange for INF Fred Stanley in 1980 after pitching the 1978 and 1979 seasons with the Athletics. Morgan made his Yankees debut in 1982 at the age of 22 years, 187 days.

Campos, 19 from La Guairá, Venezuela, was signed by the Mariners as a non-drafted free agent on January 15, 2009, and has compiled a 14-10 record with a 3.26 ERA (171. IP, 62 ER) in three minor league seasons. He spent the 2011 season with short-season Single-A Everett, where he went 5-5 with a 2.32 ERA (81.1 IP, 21 ER) and a team-high 85 strikeouts, leading the Northwest League in ERA and strikeouts and ranking second in opponent’s batting average (.214). He walked just 13 batters the entire 2011 season, recording a 1.44 BB/9.0IP ratio, third-lowest among Northwest League starters. Campos was named to the Northwest League All-Star team, and was tabbed as the league’s top right-handed prospect (third overall) by Baseball America.

Montero, 22, hit .328 (20-for-61) with nine runs, four doubles, four home runs, 12 RBI and seven walks in 18 games (14 starts at DH, three starts at C) in his Major League debut as a September call-up with the Yankees in 2011. Originally signed by the Yankees as a non-drafted free agent on October 17, 2006, Montero spent a majority of the 2011 season with Triple-A Scranton/Wilkes-Barre, batting .288 (121-for-420) with 52 runs, 19 doubles, 18 home runs and 67 RBI in 109 games and leading all International League catchers with a .997 fielding percentage (two errors, 655 total chances). He ranked third among all Yankees farmhands in home runs at the minor league level en route to being named to the International League’s midseason All-Star team. Following the season, the Venezuela native was tabbed by Baseball America as the Yankees’ top prospect for the third straight year, as well as being named the organization’s “Best Hitter for Average” and “Best Power Hitter.”

So there you go.  Jesus and Hector are officially gone and the rotation revamp has officially begun.  I can't wait for pitchers and catchers to report.
Posted by Unknown at 3:52 PM No comments:

More Stories From The Weekend

By getting caught up in the wall-to-wall college basketball on Saturday, the NFL playoffs yesterday, and my non-stop drooling over the Brett Gardner re-signing, there were a few stories over the weekend that didn't get their proper due here at AB4AR.  If you were in a similar boat this weekend, here's your chance to catch up.

- One DH option came off the table on Friday afternoon as Carlos Pena agreed to a 1-year/$7.5 million deal to rejoin the Tampa Bay Rays.  They probably needed the offensive help more than the Yankees did, and New York was never getting Pena for $2 mil, so no big deal there.

- Jorge Posada announced that he will make his retirement official some time this week, perhaps as early as Tuesday, with a press conference at Yankee Stadium.  I can't imagine there are going to be too many dry eyes in the house at that PC.

- Dr. Long has been making his round of yearly offseason house calls to work with some of the Yankees hitters.  No word on whether younger MiL guys like Romine and Jorge Vazquez get a discount or not.

- Finally, in his first public comments since the still-not-official trade from Friday the 13th, Michael Pineda spoke to Christian Red of the Daily News in a very good article by Red about becoming a Yankee, saying:

"I’m not scared. I’m always focused, working very hard every day.  I don’t think about anything else on game days. I’ve never pitched in New York or at Yankee Stadium, but I’m dying to. We’ll see what happens. I’m going to work very hard to do my job."

The trade could finally become official this week as the players involved get back into the country to complete their physicals.  As for Pineda, that's just the type of stuff I like to hear from a young pitcher, and .  And as for Pineda not being scared, well I think we just found his warm-up music for his starts at The Stadium this year.