Can Kosuke Fukudome Help The Yankees? (He wears his shin guard well, I'll say that.  Courtesy of Getty Images)

In another under-the-radar free agent signing on Friday, the Yankees added former Chicago Cubs outfielder Kosuke Fukudome on a MiL deal and assigned him to Triple-A Empire State.  The Yankees were loosely connected with Fukudome when he was first in the process of joining Major League Baseball, but he has never lived up to the "Hideki Matsui Lite" comparisons during a career of marginal improvement and very quick regression.

Strictly from a depth standpoint, this is another solid low-risk deal for the Yankees.  By the time they get away from their current 5-man bench setup and have Brett Gardner return from the DL, they are going to have to put Dewayne Wise on waivers and will likely lose him to another team.  To make sure they have enough OF coverage in case Gardner or somebody else gets hurt again, it's only smart to bring in another veteran player who fits their needs.  Fukudome fits this description in theory, but if he is needed at some point, can he actually do anything? 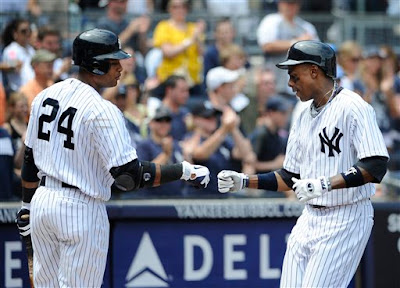 (Robbie and Curtis practice their "Hey Arnold" handshake.  Courtesy of The AP)﻿

It was a little MVP mano y mano yesterday at The Stadium as Mike Trout and Robinson Cano put on displays showing why they should be considered the top 2 contenders for the award right now.  Trout went 3-5 with a double, a run scored, and 2 stolen bases, and Cano went 2-4 with a home run, a run scored, and 3 RBI.  In the end, Cano's hits ended up being a bit more timely and he carried his team to the win and put them in position for a sweep today.

- More 1st-inning fun for both teams.  The Angels plated 2 in the top half after stringing some singles together off of Yankees' starter Freddy Garcia, and the Yankees followed up with 2 of their own in the bottom half on Cano's 2-out, 2-run HR.

- The Yankees took a 4-2 lead on their second 2-run homer of the game in the bottom of the 3rd, this one by Curtis Granderson.  Certified rally starter Chris Stewart scored after leading off the inning with a single.

- Garcia settled down a bit after the 1st, but he still had to battle his way through 5 innings.  He put one runner on base in each inning, but managed to work out of trouble most of the time.

- The only other run Garcia allowed came in the 4th inning, and it was more due to the Angels manufacturing it than Garcia giving it up.  His biggest out of the game came at the end of the inning, when he got Albert Pujols to ground out with 2 runners on.

- Alex Rodriguez doubled to lead off the bottom of the 6th, and he was quickly driven in by a Cano single for an insurance run, and that was more than enough for the Yankee bullpen, who pitched 4 scoreless innings in relief of Garcia.

- The Yankees only managed to pitch 2 1-2-3 innings on the day.  Good thing one of them was the 9th, where Rafael Soriano struck out Trout and Pujols swinging for his 22nd save of the season.