Position players aren't scheduled to report to Yankee camp until Wednesday, but Mark Teixeira arrived yesterday and started his spring workouts as he continues to work his way back from last year's wrist injury/surgery.  Teix took some light fielding drills with Mick Kelleher and some light hitting drills with Kevin Long, and when he settled into his locker today he took time to speak to the media.  I guess he's feeling better than he was earlier in the winter because the standout quote from Teix was a pretty bold declaration:

"I absolutely plan on playing 150-plus games this year.  That's my goal."

More power to him for setting the bar that high, but let's pump the brakes before we get too carried away with playing time goals that excessive.  This is the same guy who hasn't played more than 150 games since 2011, played only 15 last year, and was still feeling some stiffness in the wrist less than a month ago.  Now 1 day after showing up at camp he's saying he expects to play in over 92% of the team's games this year.  Given the backup options behind him, I'm sure the Yankees would be thrilled to get that many games from Teix this year.  Before we start talking about that though, let's maybe get a real batting cage session in and see how the wrist feels after a few ST games.
Posted by Unknown at 11:30 AM No comments: 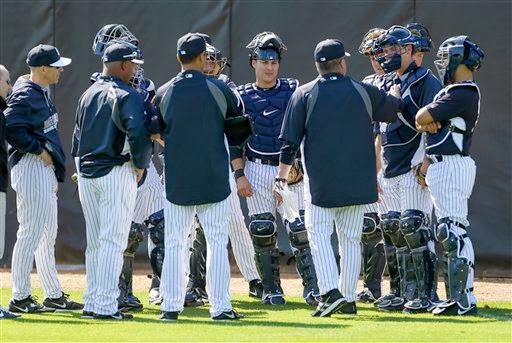 First team workout was yesterday, and to no one's surprise the biggest story continued to be Masahiro Tanaka.  Here were the major happenings from yesterday's session:

- One part where Tanaka wasn't so strong was running.  The team ran 4 laps after the pitching and hitting sessions and Tanaka told the media he was surprised by how much running they had to do, joking that the 4 laps were "pretty hard".

- Nova doesn't sound like he's taking anything for granted this spring, telling Bryan Hoch that he's treating this as though he's competing for a spot.  Maybe he's starting to figure the game out mentally too.

- Still slowly working his way back from last year's wrist surgery, Mark Teixeira did some light infield drills and some light hitting work with Kevin Long.  He's still probably a month away from being in full game shape.

- Not a huge deal, since he's just roster depth, but Yoshinori Tateyama has not arrived at camp yet because of visa issues.  Strange that he'd have those considering he pitched in the US last season.
Posted by Unknown at 8:04 AM No comments: