Damn.  It's tough to win when you only show up to play 2 of the 9 innings.  Baseball's funny that way.

Can I cue up the "A-Rod Distraction" excuse?
Posted by Unknown at 9:10 PM No comments: 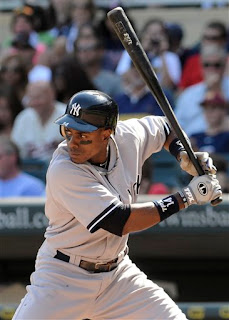 (Looks like an MVP to me.  Courtesy of The AP)
Curtis Granderson is having a monster year.  A career year.  An MVP-caliber year.  And since he's putting up MVP-caliber numbers, it only makes sense to bring up his MVP candidacy and try to figure out where he can, should, and will fall in the balloting.

The one knock on Granderson's ledger is his unfriendly defensive rating.  UZR has him at -9.2 for the season, a big drop from his 6.4 rating from last season.  This is strange because most people who watch Granderson play, while admitting that he's no Griffey or Mays in their prime, would probably agree that he plays a relatively good center field.  He certainly passes the eye test in my book, even if he does botch the occasional deep fly.  An article by Dan Barbarisi in today's WSJ included this assessment when discussing the Yankee outfield:

"He [Brett Gardner] is effectively a second center fielder, ranging wide over the left side of the field in ways no other left fielder is doing. He frequently takes balls away from center fielder Curtis Granderson, when traditionally, it’s vice-versa..."

We all know how great a defensive outfielder Gardner is, with both the eye test and the UZR numbers supporting him, so perhaps Curtis and his defensive stats this year are being hurt a bit by Gardner's exceptional performance.  And that black mark defensively could very well be what holds Granderson back from being the leading MVP candidate, as his WAR value is currently 6.1, 5th in the AL and behind guys with much better UZR ratings like Ben Zobrist, Jacoby Ellsbury, and the always-scrappy Dustin Pedroia.  To put the WAR gap caused by his negative UZR value into perspective, Stephen Rhoads at RAB had this to say about C-Grand's defensive rating:

"... if we subbed in a value of 0 for Granderson’s UZR, still a conservative number in my estimation, his fWAR would go from 6.1 to 6.9. If we gave him last year’s value of 6.4 runs, his fWAR would go to 7.6, ahead of Pedroia, Ellsbury and Gonzalez and just a tenth of a point behind Jose Bautista. In other words, it’s possible that the case for Granderson winning the MVP should look even stronger than it currently does."

Basically, Curtis' offensive superiority to his main MVP competition is being masked by this negative defensive rating, and putting him where he usually sits in terms of UZR would help boost his overall body of work above that competition and help make his gaudy offensive numbers stand out as they rightfully should.

The other thing working against Curtis, and something that thankfully there is no stat for, is the logo on his uniform.  It's a bummer to say, but it is a fair statement to make that playing for the Yankees doesn't do him any favors.  The MSM perception that the Yankees, with all their big names and high payroll, are a juggernaut and not one single player on the team stands out above the whole, misguided as it may be, does exist and has caused MVP votes to be swayed in the past.  Ask Derek Jeter how that works after he got snubbed in '06 and '09.  Some oters will look and see names like Teixeira, Rodriguez, Cano, Sabathia, Jeter, Swisher, and Rivera and assume that Granderson's numbers have benefited from being a part of that system.

The reality of that situation is that Curtis has been the one constant in the Yankee lineup from Day 1, continuing to produce while the rest of his teammates struggled through tremendous slumps at various points or hit the DL with injuries.  Granderson is probably the only Yankee hitter who can honestly say he hasn't experienced a significant drought in production at any point in the season, but that argument could fall on deaf ears when voters see the Yankees tremendous run totals and Teix's name right behind Granderson's in the HR and RBI categories.

On the other side of that point is the fact that a lot of C-Grand's major competition for MVP will fight that same perception battle.  The Fraud Sawx are just a big a fish in the pond now as the Yankees, and their trio of Adrian Gonzalez, Pedroia, and Ellsbury could all suffer the fate of being on the same team, being perceived as dependent on each other for their numbers, and splitting votes amongst themselves.  That just leaves Jose Bautista, and honestly, I don't see how you can give the award to the guy when his numbers didn't help his team be any more successful than they've been in the last handful of years.

Looking at the whole picture, it's easy to make a case for Curtis Granderson as the most deserving MVP candidate.  He's been the best and most consistent player on the best team in the AL (record-wise) and has helped carry his team through some significant injuries and poor production from key parts of the lineup.  His overall offensive body of work is one of, if not the best in all of baseball, let alone the American League.  But some strange UZR quirks hurt his overall WAR value and the battle against anti-Yankee voter feelings could hurt him in the end.  It will be interesting to see how the rest of the season plays out, but right now it would be downright insulting to not consider C-Grand a legit leading MVP candidate.
Posted by Unknown at 12:10 PM No comments: