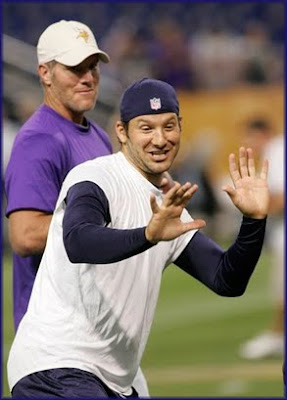 After a bit of a lackluster finish to the regular season, the Cardinals snapped out of it last week in their victory over the Packers (well, at least their offense did). New Orleans will be hoping for similar results on Saturday as they were downright awful in the last month of the season. With the way the Cardinals secondary failed to cover anybody last week, they could be just what the doctor ordered for Drew Brees and company.

The Saints will be looking to do what Green Bay could not last week, and that's get pressure on Kurt Warner. The line kept him relatively clean and his was surgical in his dissection of the Packers' blitz and coverage schemes. The Saints like to blitz on 3rd down and like to bring pressure from their secondary, but if the Cardinals protect against that the way they did a week ago, it could be another huge day for Warner, especially considering it looks more and more like he's going to have Anquan Boldin back for the game.

What the game will come down to is whether or not the Saints offense can get going again. Both teams are going to score points, but like last week, it's going to come down to who scores last. The Saints aren't going to win this game with 20-28 points. Drew Brees is a better quarterback than Aaron Rodgers and should put up big numbers against the Cardinals D and it would be almost impossible for the Saints D to play worse than the Pack did last week. They will give up yards and point, but make a handful of plays here and there that will be the difference in the end.

This line has gone up a bit with concerns lingering about the severity of Joe Flacco's hip injury. As little as he factored into last week's game, you would think that would count as an bye week for him, but the Ravens won't be so lucky this week and will have to rely on Flacco's arm more if they want to win.

The big question is whether or not the Colts can shake off the rust and win a game after resting at the end of the season, something they have not done in the past. With as pissed off as all their starters looked in Week 16, I think they use the loss of a perfect season as extra motivation to win the Super Bowl. Everyone questioned Polian for making the call when past history suggested the Colts were better off playing all the way through, so the players know it's on them to come out and perform.

The Colts will take care of the ball much better than New England did last week, so they aren't going to put up a measly 14 points, and they should put more pressure on Flacco than the Pats did as well. It will be interesting to see how the Colts try to match up Mathis and Freeney with Baltimore tackles Omar Gaither and Michael Oher; which one will they try to attack and which end will they use to attack him? If the Colts stack the box early, take away the run, and force Flacco to beat them, they should be in good shape. When a game comes down to Flacco having to outplay Peyton Manning to win, I'll take my chances with that.

It's the Showdown at the Playoff Choker Corral. The greatest gun-slingin', river boat-gamblin' son of a gun in the history of sports against the younger version of himself who is the only player in the NFL that comes close to having as much fun on the field as Favre does. There will be boners aplenty for all media covering the game, but which guy will come out and top and do a little more to squash that "can't get it done in the playoffs" stereotype?

The Vikings were looking like they were primed for a late-season collapse before they played against the Giants in Week 17. Since that victory, everyone has proclaimed them a favorite again, but it's easy to look good when your opponent is trying harder to not try than they are to actually win. The reality is the Vikings offense hasn't been what it was earlier in the year, mainly because Adrian Peterson has not been as explosive. Their defense also hasn't been as dominant due to the loss of EJ Henderson and lack of sufficient depth at LB and the fact that Antoine Winfield is hobbling around at corner and teams are attacking him over the top knowing he doesn't have his usual burst and recovery speed.

The Cowboys, on the other hand, have been clicking on all cylinders since their defeat of the Saints. Their secondary is greatly improved, their pass rush has been a force, and Tony Romo is playing great football. They’ve gotten great production from their running game, no matter who's carrying the ball, and in the process made themselves very difficult to defend.

Based on their past history, expect both teams to try to attack the QB and force turnovers early. Whoever can protect the QB and establish the run first to take some of that heat off their guy will be the team that wins. I expect this to be the Cowboys because their offensive line has been fantastic this year and Bryant McKinnie has been awful. After the disaster that was the Panthers game, Demarcus Ware has to be cumming in his pants at the thought of matching up with McKinnie and should have a field day terrorizing Favre. Once Romo gets settled in, expect him and Miles Austin to be the latest to test Winfield's injuries and open up the passing game. The Vikes will be in the game all the way, but if Adrian Peterson doesn't run for 200 yards and 3 TDs, they don't win this game. He won't and they won’t.

Is this line too high? It's hard to decide. The Jets looked like world beaters again last week on both sides of the ball, executing their "run the ball and defend"-plan to perfection, and Mark Sanchez is trending upward again at the right time. But the Chargers have been the best team in the league for the last 2 months running and have shown no signs of slowing down. Phillip Rivers was a legit MVP candidate and has now established himself as a top-tier NFL QB, right next to Manning, Brees, and Brady.

You know Vincent Jackson most likely isn't getting off of Revis Island, but unlike some of their most recent opponents, the Chargers have better secondary options in the passing game. Malcolm Floyd is big and fast, just like Jackson, and is just as good at stretching the field and creating matchup problems; considering Lito Sheppard is about 4'5", you can count on Rivers looking to get single coverage and exploit that matchup. Antonio Gates is still one of the best tight ends in the game and will challenge the Jets' linebacking corp's ability to cover, and both LT and Darren Sproles are excellent at catching passes out of the backfield. The other 10 guys on D are going to have to step up the Revis' level of pass defense if the Jets are going to win.

San Diego, like everybody else, is going to gear up to stop the run, but you have to assume the Jets are going to get their yards. 3rd-down defense and getting pressure on Sanchez are the keys for the Chargers; if they can at least stop the run on 3rd and short and get off the field, and make Sanchez think and scramble, they will win. We all know Sanchez can be a good QB when he has time to throw, but when you force him to move and rush his decisions, that's where the rookie inexperience shines through. One or 2 picks will be more than enough for the Chargers to control the game and I expect them to force at least that.