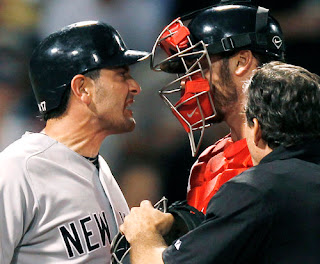 (F*ck you, Saltalamacchia.  Courtesy of The AP)

It's only Spring Training, there are only three regulars in the Yankee lineup (Gardner, C-Grand, Ibanez), and Adam Warren is the starting pitcher for the Yanks, so obviously this game means less than nothing.  But it's being televised on ESPN, which means I have the ability to finally watch some live Yankee baseball this year, and that means it's the perfect opportunity for the first official AB4AR live blog of the season!

Coverage starts at 7PM EST/6PM Central, with first pitch some time right after that.  Come hang out, check in, and feel free to add a comment or two.  I'm more than capable of entertaining myself with bad jokes and commentary on how bad Ibanez's swing looks, but it's always more fun with more people.  If nothing else, we can laugh at what I'm sure will be ridiculously one-sided, Bobby V ball-licking commentary from the announcers together.

Who gives a damn?

2012 Storylines: Playing For A Job 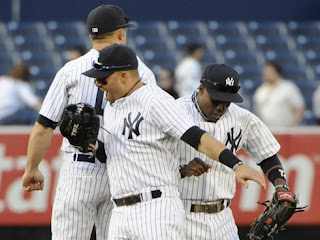 (Will there be a new face doing the three-way back bump after this year?  Courtesy of The AP)

Roster turnover is a part of any baseball season.  Over the course of 162 games, there are going to be a multitude of injuries, signings, trades, promotions, and demotions that will affect the breakdown of the 25 men on the active roster, and the 25-man on Opening Day will assuredly look different than the one on the last day of the regular season.  The Yankees come into the 2012 season with the majority of what will be the Opening Day roster intact, with a spot or two still up for grabs.  Thanks to their big budget, a well-stocked farm system, and some shrewd MiL contract deals, they are well positioned to handle any kind of change to the roster as the season progresses.

But there is another factor that will affect roster turnover this year, a factor that usually isn't part of the Yankee equation.  That factor, of course, is the goal of getting the payroll under $189 million by 2014.  There are players on the team right now who likely won't be wearing pinstripes by then as part of cutting costs and players whose involvement in future plans will be determined by how they perform over the next couple years.  The payroll goal will become more of a behind-the-scenes storyline once the regular season starts, but it will always be there and could have influence over roster decisions during the season.  Between that and the regular ebb and flow of roster changes, there are multiple groups of players who will have more to play for this season than just winning a championship. 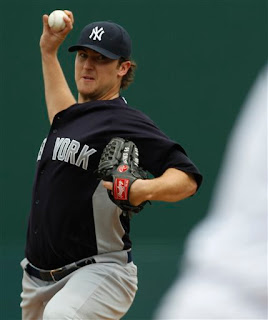 Don't look now, but Phil Hughes- the man involved in his 3rd straight rotation competition, the man coming off the worst year of his professional career, the man who's being talked about as the leading candidate to either be sent to the bullpen, sent to the minors, or traded if he doesn't pitch well this year- has been the best starting pitcher in Yankee camp.

I know technically he's only made two starts, but in the other two outings where he backed up CC he was working as a starter and that's good enough for me. After yesterday's 5-inning performance he has now thrown the most innings out of all the starting rotation contenders (with a game in hand on CC and Kuroda) with 13.1, and he has been the most consistent pitcher of the group. He's the only one with a WHIP below 1.00, he's attacking hitters and throwing a lot of strikes, and if it wasn't for a poorly placed cutter to Matt Joyce yesterday he would only have 1 ER allowed on his ledger.

More important than that, though, is the fact that his stuff is back. Hughes' velocity on his fastball has been sitting 91-93 since the first time he took the mound, with a 94 here and there, which is right where he needs to live to be effective. His curveball has also looked much sharper than it did last year, and he's getting bad swings on it. And his changeup, a pitch that we've been waiting to see him use consistently for a couple years now, has evolved into a pitch that Hughes is confident in and willing to throw. I specifically remember him getting Evan Longoria to fly out weakly on a change yesterday as well as Joyce striking out swinging on it in the at-bat after his HR. He's working the cutter as well, but if Hughes can mix fastball-curveball-changeup consistently he can be very good.

This is the Phil Hughes we were expecting to see last year. He still has a lot to prove and it won't be fair to say he's "back" until he does it in the regular season, but the way he looks and the way he's pitching this spring certainly has to inspire confidence that he's on the right track. Freddy's hand injury probably sealed the deal for him, but even if he didn't get hurt it should be a no-brainer that Hughes gets a spot in the rotation to open the season.

The Importance Of Spring Training

No one needs to be reminded of how unimportant Spring Training stats are (but if you did, there's another reminder). But what about the overall format of Spring Training itself? It's structured such that players are eased into full-scale baseball activities, but how much do they really need that structure? Every player is different and needs to do different things to get themselves into full game shape. Some guys need lots of time in the cage and on the field to get right and some like Mo seem to be able to roll out of bed and be at the top of their game. There are some Yankee regulars that have missed significant amounts of time with injuries this spring, and thus find themselves well behind the typical Spring Training schedule. None are expected to miss Opening Day, but when you consider the sport being played it's worth asking how effective they can be without a full spring routine under their belt.

Baseball isn't a sport that requires tremendous amounts of continuous physical exertion, at least not compared to sports like hockey and football, but it does require an incredible amount of skill to be successful. That skill is rooted in things like mechanics, timing, balance, body control, reaction time, and hand-eye coordination, all things that aren't as simple as running or jumping and thus require more practice time and more repetition. It makes sense to me that missing significant portions of that practice time in Spring Training would have an adverse reaction on a player's preparedness for the regular season. I'm sure Dave Robertson, Derek Jeter, and Nick Swisher all had their own individual ways of working out and training this past offseason to prepare themselves for 2012, and I'm sure they all had certain plans and things they wanted to accomplish in the structure of the Spring Training schedule to continue that preparation. Falling out of that schedule, scrapping those plans, and not being able to work on the things they planned to must have a negative impact on their game, no?