Didn't see this one coming.  After reports earlier today that the final changes to the new NPB player posting system had been agreed to by both sides and could be put into place as early as next Monday, Major League Baseball decided to put the brakes on things this afternoon and now plan to change their side of the proposal.  MLB Chief Operating Officer, and A-Rod's best friend, Rob Manfred had this to say:

“We warned them, told them, if this sat too long, there could be shifting winds out there. And suffice it to say, there have been shifting winds."

What those winds are nobody knows, but David Waldstein just tweeted that it could have something to do with smaller market MLB teams wanting posting fees to count against the luxury tax.  This would obviously be a huge blow to the Yankees, who were hoping to go hard after Masahiro Tanaka whenever he was posted while staying below the luxury tax threshold.  With things back up in the air and no clear direction on what comes next, the new posting agreement might not get put into place this offseason and Tanaka might not be made available for 2014.
Posted by Unknown at 4:36 PM No comments:

(Used courtesy of the fine folks at Pinstripe Alley)

I mentioned this earlier in the Freese post, but the other "big" infield story that popped up yesterday involved Brendan Ryan and the high level of interest both he and the Yankees are reported to have in each other.  Ryan became the everyday shortstop after he was acquired late in the season, and hit .220/.258/.305 (.252 wOBA) in 62 plate appearances while reminding everybody what a good defensive shortstop looks like.  That performance appears to have been enough to convince the Yankee brass he's worth another go because Joel Sherman reported last night that the 2 sides are "close" to a new deal.  It's not even in the same area code as a Tanaka or McCann signing would be, but bringing Ryan back would be a smart strategic decision on multiple fronts. 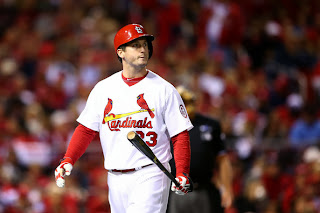