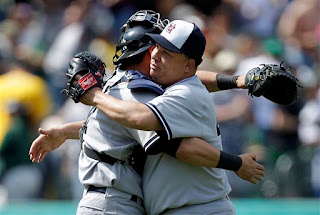 (Not gonna lie, I kinda want to hug the guy too.  Courtesy of The AP)
How's this for a stat line:

If you would have told me I'd be getting that line from a 38-year-old Bartolo Colon in a start on the West Coast in late May, I would have asked for the phone number of your drug dealer.  At this point, there is no debate anymore, no other way to say it.  The guy has been flat out money.  He has been worth the 900k the Yankees shelled out to get him and then some after just 8 starts!

For a change of pace this season, Joe actually made a decision about his pitching staff that worked out when he decided to flip CC and Colon's spots in the rotation after last week's off day.  And boy did it work out.  CC's outing on Sunday was a tough act to follow but Colon blew it out of the water yesterday with an extra day's rest.  He absolutely owned the outside corner with his fastball, consistently getting ahead in the count (first-pitch strikes against 23 of 30 batters faced) and then putting guys away thanks to his pinpoint command.  As has been the case in his strong outings, he never lost any velocity as the game wore on, and Joe followed up one good decision with another by letting him go out for the 9th inning and finish the game.

There's really nothing left to say about what Colon has done this year and how smart Cash was for monitoring him and then having the faith in what he saw to sign the guy.  Every time he steps on the mound, I feel like more of a jackass for all the negative ranting and raving I did back in January and February.  But with the kind of results Colon has put up, I don't mind looking like a jackass.  I mean, a 3.26/3.35/2.91 tripleslash and 1.3 WAR in just 11 outings?  For less than a mil???  That's highway robbery of the highest order.

If anybody needs me, I'll be going back through my earlier posts where I made fun of Colon's moobs and slapping myself.
Posted by Unknown at 9:34 AM No comments: