Ahh You Fahcking Kidding Me?

And especially awn a day whey-ah Lack is stahhting!  It's been a tough fahckin' yee-ah fah the guy.  He needs a win.  WE need a win!  You need to fahckin' get it to-fahckin'-gethah, my friend.  Look at how upset Lack is: I think he shat himself.  The fahhckin' magic numbah keeps getting lowah.  And we don't even know how Jawsh's ankle is going to hold ahp awn Friday.  Fahckin' nawt good times, bro.  Nawt good times.
Posted by Unknown at 9:28 PM No comments:

The playoff bullpen is always a tricky situation.  You want to make sure you're covered for every conceivable match up or extra-inning situation that can and usually does come up, but you don't want to do it at the expense of thinning out your bench.  Depending on manager preference, opponent, and schedule, 10-11 pitchers is more than enough to cover a team for a series, 7 of them bullpen guys.  The Yankees are going to have some decisions to make when it comes time to pick the 25-man for the playoffs.  Here's how the pool of bullpen candidates breaks down.

These guys would be in even if they had their arms cut off Black Knight-style.  Despite some hard-hit balls against him recently, Soriano looked solid last night and has looked solid ever since he came back from the DL.  He's the official 7th Inning Guy.  D-Rob is a high-socked monster who's having one of the best seasons for a reliever in recent memory.  Any way you check the stats, D-Rob has been one of the 3 best relievers in baseball this season, and he has thrived in high-leverage situations.  He's got the 8th inning on lockdown.  And Mariano Rivera is still the closer for the team, and still the best closer ever.  He's in.

If Mo, D-Rob, and SP are sitting at the head table of this party, then these 3 guys would be table 2 or 3.  Boone Logan, issues against lefties aside, is still the team's #1 lefty out of the 'pen.  And with big bats like Josh Hamilton and Big Sloppi looming in the playoffs, he's going to be Joe's go-to guy for those at-bats whether he's earned that role or not.  Wade has been an absolute steal of a pick up, effectively filling the 6th-7th-inning void left by Joba's injury and D-Rob's graduation to the setup role.  His sub-2.00 ERA is a bit deceiving, but he throws strikes and hasn't seemed to be the type to shrink in a big spot.  Noesi is like a 2011 version of Ramiro Mendoza.  He can come in to finish up lower-leverage games, provide an inning or 2 of high-leverage relief, or go 3-4+ innings if a game goes deep into extra innings.  Barring injury, I think all 3 of these guys are safe bets.

I'm going to go ahead and say that Phil Hughes won't be picked for the postseason rotation, but Joe will still want him available as a relief option since we've seen before how his stuff can play up out of the 'pen.  That being said, if Colon or Garcia goes down in the last few weeks, I think Phil gets the nod over A.J. if Joe sticks with a 4-man rotation, so I can't fully commit to him being the 7th reliever.  Ayala has had a mind-boggling season.  He's given the Yankees what they needed from him, but his 4.03 FIP exposes his 1.80 ERA as phony and he hasn't made very many high-leverage appearances. He has rebounded from a late-August slump to throw 4.1 shutout innings in 5 September appearances while only allowing 2 baserunners, and could replace Wade or Noesi if Joe values "experience."

Tier 4- Outside Looking In: A.J. Burnett, Aaron Laffey, Scott Proctor, every other September call up

Anything short of pitching complete game shutouts in the rest of his starts this season and I don't think A.J. gets invited to the postseason party.  And taking a lifetime starter and trying to make him a reliever in a short timeframe is risky, doubly so when the pitcher in question is A.J. Burnett, King of Wild Pitches.  Laffey could have been a Wild Card because of Boone Logan's recent dead arm, but as long as Logan is healthy Joe won't consider Laffey and shouldn't.  And since Joe doesn't seem interested in seeing what guys like George Kontos and Andrew Brackman can do, they don't have much of a shot.  Also, Scott Proctor sucks.
Posted by Unknown at 3:28 PM No comments: 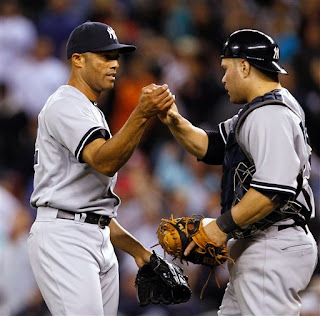 (Start the countdown to 602.  Courtesy of The AP)
The cutter, the consistency, the inhuman ability to never age.  Mo's the greatest of all time.  'Nuff said.
Posted by Unknown at 7:35 AM No comments: