Can Somebody Throw Some Cold Water On Andrew Marchand?

The March must have been a little excited after the Yanks win last night, and I can't really blame him.  I myself christened my new luxurious leather armchair with its first ever Yankee-related freakout as soon as the ball left A-Rod's bat in the 9th, complete with TV clicker toss, multiple fist pumps, and a hot lap around the apartment living room.  But Andrew might be reading a little TOO much into last night's win:

Then Marcus Thames finished off Papelbohn with his own two-run shot and the question is: Did the Yankees just finish off the Red Sox?" (courtesy of ESPN NY's  Yankee blog)

Andy, Andy, Andy.  Take it easy, buddy.  To quote The Wolf from Pulp Fiction, "let's not start sucking each other's dicks just yet."  It was the 38th game of the season.  We're not even a quarter of the way home and you're already going to bury the Sawx?  Let's not forget that this is the same team that flat out owned the Yankees from the 2004 ALCS through the summer of last year.  Sure they are a lot older, creakier, weaker, and shittier than they were back then, but you still can't write them off just yet, especially when the Yanks are riddled with injuries and bullpen issues and the Rays haven't come back to Earth yet.

Don't get me wrong, nobody loves calling out the Sawx for sucking at baseball and fucking up constantly and rubbing it in their face when they lose to the Yankees more than me.  But it was just one game and there is still plenty more baseball to be played.  So put your pants back on, Andrew, let go of the bottle of Jergens, and sit back down at your computer and do a little reporting.
Posted by Unknown at 12:39 PM No comments: 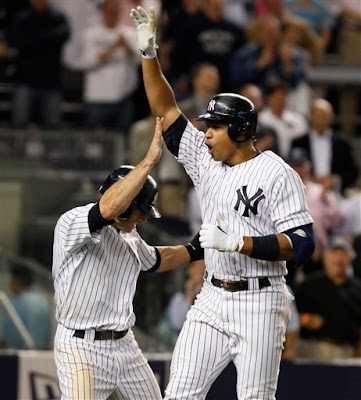 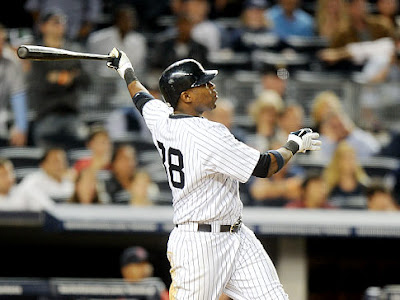 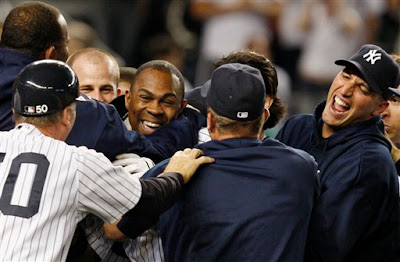 (Photo courtesy of The AP)
Happiest times!
- It was right around this time last season that the Yankees started their run of magical walk-off wins.  Last night's couldn't have been much better so we'll see how what this does for a team that is still incredibly beat up and depth-deprived moving forward.
- Tough start for Phil Hughes last night, but a quick look at the numbers shows that he really wasn't awful.  He threw 104 pitches through 5 innings, which is hardly efficient.  But that high number can be attributed to the Red Sox fighting off a lot of good pitches last night and making Hughes work until they got something to hit.
Hughes threw first-pitch strikes to 16 of the 22 batters he faced and 71 of his 104 pitches were thrown for strikes, so he wasn't wild or missing spots badly.  His strike breakdown shows the true story: 20 looking, 5 swinging, 28 fouled off, and 18 in play.  The Red Sox just hacked away at most of Hughes' stuff and wore him down, which is what good hitters will do.  Shit, it's what the Yankees do to pretty much everybody they face.  Hughes gave up 6 hits and just 1 walk, so his command was there.  He just threw a couple bad cutters and Boston made him pay.
What I liked was after the game Hughes seemed to know exactly what happened.  He credited Boston for battling and fouling pitches off and acknowledged that he wasn't able to put guys away with the cutter after getting ahead in the count.  He wasn't lost or clueless out there last night; he knew what was going on and was in control, he just got beat by a couple of good swings.  Even after his first bad outing of the year, Hughes is still 5-0 with a 2.25 ERA.  So anybody who's thinking of picking his start apart last night can just calm the F down right now.
- If you really want to throw some blame around, how about Dave Eiland?  Kid is looking good through 4 innings and then gives up consecutive hits to Scutaro and Pedroia after 2 long battles.  How about coming out to talk to him before Drew steps up, Dave???  Reassure him, ask him how he feels, tell him not to worry about it, ANYTHING!!  Just get your ass out of the dugout and do your goddamn job.
- Girardi won't be winning any Coach of the Game awards either for his bullpen management last night.  Boone Logan in the 6th?  Yuck.  Chan Ho Park for a second inning in his first game back?  Are you kidding me?  I know he was holding Joba out and they're trying to set up Javy to start on Friday, but you can't let Park come back out in the 8th.  He looked good in the 7th, he did his job, let that be it.  The difference between Park in the 7th and 8th was like night and day and that's an awful job by Joe leaving him out there, regardless of whether or not it was against righty hitters.
- Speaking of Javy, how's that for a little morale boost?  Enter in the 9th, strike out the only batter you face, and then pick up a win for the efforts.  Kind of balances out the sting of losing the tough decision in Detroit last week.
- Jorge Posada can keep getting banged up all he wants if Cervelli is going to keep doing what he's doing at the plate.  Dude has 15 RBIs in just 60 at-bats on the season.

- Good luck with the surgery today, Nick.  See you in August, maybe.  Thanks for nothing.


Well shit!  It's bad enough that Nick Swisher is out of the lineup, now the Yankees are missing his brother, Steve, too??  Any more tragedies like this and they are going to be forced to go out and get a lefty bat for the bench.  Godspeed, Steve Swisher.  Get healthy soon.

- Don't look now, but The Horse has 31 RBIs and Teix has 30.  Now that these guys are heating up, imagine what they could do if Jeter could stop grounding out to short and actually get on base!
- After a win like last night's you really want to come out and keep the momentum going.  And what better way to do that than by facing the human batting cage pitching machine, Josh Beckett?  I'm almost salivating at the thought of how many hits and run the Yanks can put up tonight against him.  And CC is due for a dominating start so a combination of the 2 and a crushing 11-2 victory tonight would be great to get with Tampa coming into town tomorrow.
Posted by Unknown at 7:52 AM No comments: