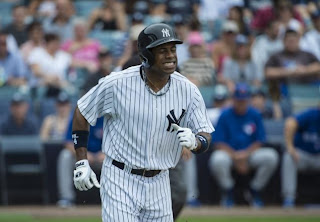 Mo Ahead Of Schedule Again This Spring, Could Indicate Retirement Plans

When Mariano Rivera showed up early to camp (by his standards) last season and started throwing earlier than he usually did, it was a pretty strong indicator that 2012 was going to be his last season.  Those plans got derailed by his ACL injury, but it appears Mo is taking a similar approach this spring as he puts the finishing touches on his comeback from surgery.

Now it could just be a coincidence that he's on almost the same schedule he was last year- arrive the day after pitchers and catchers report, starting throwing bullpens and side sessions weeks earlier than he used to- and the timing of Mo's ST activities could be dictated more by his knee rehab schedule than personal preference, but it's still worth nothing that he's ahead of where he usually is at this point in ST.  He faced live hitters for the second time this morning and said the knee felt good.  The next step is still pitching in full game situation settings and seeing how he moves when he has to field a grounder or cover first base, but Mo himself talks like he's not worried about that.

Mo said a few weeks ago he had made a decision on his future after this season but that he wasn't going to announce that decision yet.  I saw his accelerated schedule last ST as a sign that he was going to hang 'em up after the season, and even if that similar schedule this spring is being driven by the knee rehab and not Mo's own plans I still feel it's that same  sign.  On the one hand, it's great to see that Mo is progressing nicely and not suffering any setbacks on his road to recovery.  On the other, it's never good to have to think about Mo retiring again.

(Why pitch that far inside in late February???  Courtesy of the AP)

I've been tougher on Curtis Granderson than most these past few seasons, admittedly shifting from excitement about his new power swing to disappointment that it sapped so much of the rest of what used to be a well-rounded offensive game.  But even I can't try to spin his fractured right forearm into anything remotely positive because there's simply nothing positive to take from it.  Granderson was one of the handful of players the Yankees couldn't afford to lose this year, Teix and Cano being the other two, and to lose him for 10 weeks, even if half of that time is Spring Training time, is a huge blow.  The baseball season doesn't give you timeouts or do-overs, though, so the Yankees must move forward with the players they have and try to figure out a strategy for how to get by without C-Grand until May.

There are a lot of aftershocks that will be felt throughout the ST roster and lineup, from now until the regular season starts, and a lot of players who are going to be looked at differently for the rest of spring camp.  In order of most immediately important to least, here are the biggest effects of C-Grand's injury.