Terry Francona Is Gearing Up For A Late Season Charge... 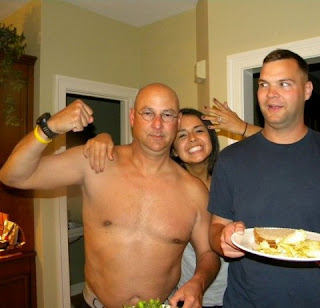 (Photo used courtesy of Barstool Boston)
I mean just LOOK at the guy!!  Gettin' right down to business in the clubhouse there, coming up with the perfect lineup to help the Fraud Sox make that final push towards the AL Wild Card.  The passion!  The dedication!  The nudity!  If that doesn't inspire his scrappy bunch of players to man up and fight for their fallen brethren then I don't know what will.  It's similar to Mel Gibson grabbing the American flag and running after the revolutionaries who were retreating in the final battle of "The Patriot." Just inspiring stuff right there.

Seriously, can we start sounding the death knell for the Sawx yet?  How much longer do I really have to pretend like they have a chance?
Posted by Unknown at 4:06 PM No comments:

I Still Love Phil Hughes (Even When He Doesn't Pitch That Well), And Here's Why

I'm sure there are going to be plenty of worriers out there today trying to figure out what's wrong with Phil Hughes after his second straight shaky start, but you can count me out of that group.  Hughes obviously had no command of his fastball last night, and for the umpteenth time this season could not put hitters away with 2 strikes.  But he still went out there, battled his ass off, kept runs from scoring, and kept his team in the lead, something that certain other members of the Yankee pitching staff seem incapable of doing.

And then there were these quotes from Hughes after the game:

“It’s been going on for a couple starts too, so it’s starting to snowball,” (referring to his high walk total again).  “It’s something I need to get right, and we’ll work on these next couple bullpens, and we’ll see if we can get this thing turned around… I rely on my fastball. I throw it more than another pitch. I throw it a great deal. When it’s not there, it really makes it tough for me to do what I want to do. That was the case tonight.”

“It’s probably mechanical. Standing on the rubber, tonight especially, everything was different, every pitch. I couldn’t get in a groove. I did make a couple good pitches in a row, it left me and then I had to go find it again. It was a battle, and it’s not fun to pitch like that… It’s mechanical, finding consistency. It’s certainly not a strength or a fatigue issue.”

“I was embarrassed for myself so I can only imagine how frustrated it must have been for our guys who were battling at the plate to have to sit out there and watch that.  I just told them to keep battling and I’ll try to fix whatever’s going on.”

That doesn't sound like a 24-year-old kid in his first full season pitching as a starter for the most storied franchise in professional sports.  It sounds like a seasoned veteran who genuinely cares about his performance and how it affects his team and seems to have an understanding of what's going wrong and what needs to be done to fix it.

And that's why I love Phil.  He's wise and tough beyond his years, and he always gives off the impression that he's focused on ways to get better.  Teammates notice that kind of thing and they feed off of it.  When I watch clips of A.J. talking to the press after a bad start or read what he said the day after, I don't get that same feeling from him.  A.J. gives off the vibe that he's just beaten down by his shitty performance and doesn't really know or care to know how to fix it.  There's only so many times you can tell me you couldn't locate your pitches before I'm going to say "OK, asshole.  But what are you going to do differently next time so you don't have the same end result?"

I'm not saying A.J. isn't genuine in his disappointment when he pitches poorly.  Obviously both guys care about their results out there and how those results affect the team, but Phil just seems more in tune with what he's actually doing out there and more willing to work on correcting the problems.  I'm sure he'll sit down with Eiland today to review video from last night to see if they can find the mechanical problems he alluded to, and I'm sure he'll be working on correcting those in his bullpen sessions before his next start.  I'm not so sure A.J. will, and that's what I love about Phil and hate about A.J.  A.J. seems to be waiting around for his stuff and command to come back to him; Phil seems to be working to go out and regain it.

And for all we know, Phil could be getting tired down the stretch, and it would certainly be understandable given this is the most innings he's thrown since '06.  But he's not even letting that factor in as an excuse, and I love it.  So don't worry, Phil.  Some others out there might start to question you moving towards the end of the year and suggest you should be moved to the 'pen, but here at AB4AR we've still got your back.
Posted by Unknown at 12:33 PM No comments:

The Most Interesting Yankee In The World 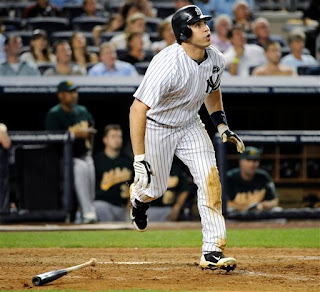 He can drive in runs simply by thinking about it.

Major League Baseball schedules the team's off days around his schedule.

He melts down the gold from his Gold Glove awards and uses it to make Kanye West's jewelry.

He is Mark Teixeira.

He doesn't always drink beer.  But when he does, you can be assured he doesn't drink some shitty Mexican piss water like Dos Equis.
Posted by Unknown at 7:44 AM No comments: