Catching Up With Fraud Sox Nation

2 big stories out of Bahhhhhhhhhhhston this week that should interest Yankee fans.

1, Nomahhhhhhh retired yesterday.  Out of the trio of Nomar, Jeter, and A-Rod, Nomar might have been the best all-around player at his peak.  Unfortunately his body couldn't hold up (maybe due to steroid use) and he fell off the face of the baseball earth before retiring as a Red Sock yesterday.

Not surprisingly, ESPN gobbled Nomar up to be their newest baseball analyst.  Now on paper this looks like a good move for ESPN as their stable of Red Sox Nut Huggers has been ravaged over the last year with the loss of sex maniac Steve Phillips and mushy brain Peter Gammons.  But with the ugly ending to his playing career in Boston and the obvious tension that still exists between Nomar, Theo, and Lucchino, it's not a given that Nomar will play ball with ESPN and fall in line with the rest of the mindless ex-players/Boston mouthpieces that take up space on the Baseball Tonight set.

I mean, does that look like a guy who was legitimately happy to be there yesterday? 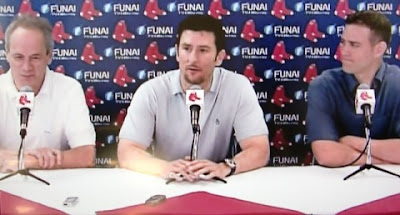 (Photo courtesy of Barstool Boston)
If anything, I would be willing to bet Nomar spends more time slurping the Yankees since the 2 players with whom he is most closely associated are manning the left side of the Pinstripe infield.  At any rate, it should be interesting TV so keep an eye out for that.

Secondly, and much funnier, is this ridiculous video that Nike did on Jacoby Ellsbury and his FREAKISH!!!! athleticism.  Now I can't get on NESN for featuring this, but the fact that it's being presented in a way that makes Ellsbury look like a good baseball player is absolutely hilarious.

38.5-inch vertical jump?  Wow, that is high!  Too bad it doesn't help Ellsbury when he takes shitty routes to balls hit to the wall or in the gaps (thank you, homefield scoring).  But it's the same height that Tim Tebow jumped, SO IT MUST BE A BIG DEAL!!!!!!!!

And I'm sure that blazing "5-10-5" shuttle speed is going to come in handy helping to improve Ellsbury's below-average OBP, OPS, and OPS+, which make him overvalued as a leadoff hitter because he doesn't walk enough and has never managed to score 100+ runs in a season despite being a career .297 hitter and leading the league in stolen bases 2 years in a row.  But hey, any time you can overinflate a player's value based on his "Freakish Athleticism" (citing Jay Bilas) you have to do it.

The one thing I will admit is that the 65-foot powerball throw is pretty fucking impressive.  In fact, we'll probably all marvel at how far he can throw his bat in disgust after CC strikes his fucking ass out to end the 7th inning.  BWAHAHAHAHAHAHA!!!!!!!!!!
Posted by Unknown at 5:52 PM No comments: 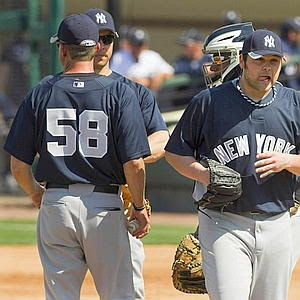 Yesterday should have been the day that Joba and Phil stepped up and took charge of the race for the 5 spot. But Joba's putrid performance combined with the previously-mentioned success of Sergio Mitre and Ace makes talking about the Joba-Phil competition useless, so I'll just keep it quick.

Joba looked solid through his first 2 innings and then the wheels completely came off in the 3rd. A barrage of singles and walks culminated in a Gerald Laird grand slam that chased Joba from the game with a final line of 2.1 IP, 5 H, 3 BB, 6 ER, 1 K. After the game the excuses started flying, with mention of everything from Joba getting tired to Joba still not being fully recovered from the flu to Joba having small mechanical problems. Whether or not any of that influenced his 3rd inning meltdown, the fact is Joba once again lost his touch in an inning and showed no ability to battle his way out of trouble by being aggressive with hitters and making good pitches, something that has plagued him since his first Major League start.

Hughes relieved Joba in the 3rd and after giving up a rocket home run to Ryan Raburn and a shot to deep center that was erased by a fantastic Curtis Granderson catch, he settled down to pitch 2 2/3 decent innings. His fastball command wasn't perfect but it was better than his first outing and Hughes showed continued improvement on his off-speed stuff, particularly the new changeup (which he tried to throw twice in a row for strikes and missed, causing him to fall behind 3-1 in the at-bat against Raburn).

It was another decisive 10-9 round for Hughes in the fight against Joba and the grand slam to Laird was the equivalent of Joba getting staggered with a 1-2 combo, but with the continuing solid performances of the other 5-spot candidates, this mano-y-mano battle now has to be considered a no-holds-barred battle royale. And don't be shocked to see Chad Gaudin cracking dudes with a steel chair to keep himself in the mix.
Posted by Unknown at 9:27 AM No comments: