Ahh, the beginning of the NFL season.  Such a wonderful time of year.  Don't worry, I'm not going to revert back to the early days of AB4AR and actually discuss NFL games in detail, but I am going to talk about how awesome it is to have football on TV for the entirety of each and every weekend for the next few months.  Concussion problems and Roger Goodell's dictatorship approach to being NFL commissioner aside, football is still the best spectator sport in the world and it gives me another excuse to be a lazy slob on the weekends.  "Sorry, guys, can't make it to that charity children's cancer walk tomorrow.  The game's on!!"  A wall-to-wall NFL session on Sunday will also be a welcome distraction from the increasingly frustrating New York Yankees.  I don't know if they're the national TBS game on Sunday or not, but I honestly might not even watch if they are.  Now onto the links!

- On Monday, George S. of Gutty Gritty Yankees lamented the fact that the Yankees passed on Yoenis Cespedes thanks to Hal Steinbrenner not being like his old man.  Cespedes would look good in pinstripes right now...

- DBurchHero of The Greedy Pinstripes made his case for why Chris Dickerson should get Andruw Jones' at-bats.  Hard to argue against that given what Jones has been doing at the plate (nothing).

- On Tuesday, Mike Axisa of RAB mused on CC Sabathia's continued lack of dominance in 2012, and what the causes for it could be.

- William Juliano of The Captain's Blog looked at just how pathetic the offense was during this recent slide and set the stage for a turnaround.

- On Wednesday, Chad Jennings of LoHud put a bow on the Yankees' low point of the season with this breakdown of their mid-week offensive numbers.  It's never good when Jayson Nix and Chris Dickerson are your best hitters, no matter the sample size.

- Mike Eder of TYA analyzed Phil Hughes' latest short outing and concluded that there are some signs that Hughes may be running out of gas this season.  That's not what the Yankees need right now with their rotation problems.

- Matthew B of Yankees Fans Unite wondered if it was fair to throw some blame Joe Girardi's way for the Yankees' semi-collapse in the last month.

- Alex Pugliese of Yanks Go Yard became the latest to make the "Yankees probably shouldn't re-up Curtis Granderson after next year" argument based on his 2012 results.

- On Thursday, William Tasker of IIATMS, inspired by some comments, attempted to get to the bottom of Russell Martin's horrific BABIP this season.

- Curtis Clark of Bronx Baseball Daily commented on the insane convergence of luck and statistical flukes that have led to the Baltimore Orioles' success.  You know, if you wanted to get even more frustrated with the Yankees' situation.

- On Friday, SteveB of Pride Of The Yankees had some strong opinions on the jobs that Kevin Long and Joe Girardi are doing right now, and peppered them with the dreaded "F" word.

- Josh Norris of Minor Matters is doing a bang-up job of covering the Trenton Thunder playoff series, so if you're into following the MiL playoffs you can't do much better than following Norris' coverage.

For this week's Friday Jam, we're going with "Goldie" by A$ap Rocky.  Dude's making a name for himself right now, and although I'm not quite sold on him and his whole crew there's just no way that anybody can deny this song's catchiness.  If I had the money, this video is exactly how I would live my life.  Enjoy.

Some Friendly Suggestions For The Final 3 Weeks

These past 3 weeks have not been enjoyable as a Yankee fan or a writer.  There isn't much to be found in the way of positive talking points, and I feel like the Yankees' pathetic play has been taking its toll on me.  It's mentally and emotionally draining to watch the team play the same tired, sloppy, lifeless brand of baseball and then have to either stay up way later than I wanted to or drag my ass out of bed way earlier than I wanted to the next day to write about it.  So you know what?  Rather than sit here and agonize over the crummy bullpen or RISP Fail for the umpteenth time, I'm just going to offer up a few friendly ideas for what I think needs to be done in these last 3 weeks of the regular season.  Some of them could help the Yankees win more game, some might not, but at this point I'm fed up with watching the same things continue to happen and continue to generate the same results.  I fancy myself a pretty knowledgeable baseball guy, so maybe these suggestions are actually the keys to righting the ship.  They can't be any worse than the strategy Joe's already rolling with.
Read more »
Posted by Unknown at 9:00 AM No comments: 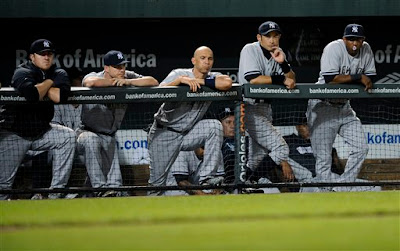