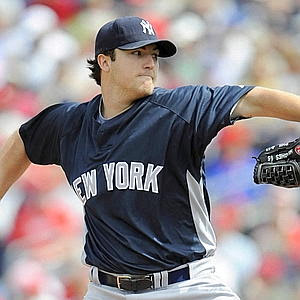 After yesterday I think it's safe to say that the trainer is throwing in the towel on the Joba-Hughes "Fight For the 5th Spot."  As Mike Goldberg would say, "IT IS ALLLLLL OVER!!"

Hughes pitched 4.1 innings yesterday against the Phillies, and despite giving up 3 homers (2 of them possibly wind-aided) and 4 earned runs total on 5 hits, was given heaps of praise from manager Joe Girardi on his performance with Girardi saying "I thought it was the best he had thrown." Hughes again worked his developing changeup well, Girardi calling it "...the best his changeup's been," all spring, and struck out 6 batters in his 4+ innings of work while allowing no walks, a key sign that he was attacking hitters and making good pitches, a concept that has continually eluded Joba in a starting role.

Joba worked an intra-squad game yesterday and was solid (5 IP, 6 H, 2 ER, 1 BB, 1 K) without being spectacular. He threw 75 pitches, 48 for strikes, and induced plenty of ground balls, also something indicative of a pitcher attacking the strike zone and making good pitches. But at the end of his day, there were no rave reviews coming from anybody, certainly not from Joe, who called Joba's outing "pretty good," and the general feeling around the blogosphere and mainstream media today is that Hughes did more yesterday to secure his spot in the rotation than Joba did to overtake him in the race.

The Yankees have an off-day Thursday so the plan is for plenty of serious discussion on Wednesday about who the 5th starter should/will be. Alfredo Aceves still can't be counted out of the mix with the job he has done this spring, but with his last outing being his worst to date and Hughes' outing yesterday being thought of so highly by the manager, one has to assume Phil is going to get the nod and Ace and Joba will be shipped out to the 'pen by the end of the week.

All in all, another decisive 10-9 round for Hughes and a likely unanimous decision on the judges' scorecards in favor of Phil Hughes as the winner of the fight for the 5th spot in the rotation.
Posted by Unknown at 11:11 AM No comments: