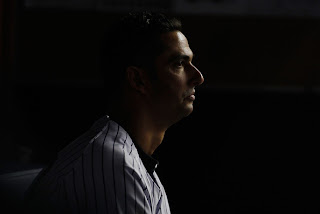 The Yankees have not completely cast Jorge aside, at least not yet.  He is in tonight's lineup, DHing and batting 8th, most likely as an opportunity to show he still has something to offer as a left-handed hitter.  I know if I were filling out the lineup card, there's no way I sit Jesus after the show he put on yesterday.  But Joe, being the loyal type, is going to do everything in his power to give Jorge chances here and there down the stretch.  But if Jorge doesn't produce, and Jesus keeps firing Heavenly lasers into the bleachers, Jorge could spend the entirety of the postseason strictly as a spectator.  Not a very pretty image for one of the great Yankees of this recent generation, but an increasingly likely one.
Posted by Unknown at 4:05 PM No comments:

The big story this past weekend, before Jesus went H.A.M. yesterday afternoon, was supposed to be the announcement of who would be taking the 5th spot in the rotation for the remainder of the season.  Joe teased it in his pregame presser on Sunday, and we all thought we were finally going to get to see this issue get resolved, with Phil likely getting the spot and A.J. being rightfully relegated to bullpen mop-up duty.

But a funny thing happened during Joe's postgame press conference.  Instead of sitting in front of everybody and saying that, despite his recent solid outing against Fraud Sawx Nation on Thursday night, A.J.'s recent body of work was not enough to keep in the rotation, or saying that Phil was looking better, but this recent setback of bad outings has the team concerned about his ability to give them consistent innings, Joe decided to say nothing.  Instead, he reverted back to classic 2nd-grade tactics and gave us all the "PSYCHE!" response when asked what his decision was.

“We’re going to go another time through.  I’m allowed to change my mind; that’s why I don’t make instant decisions… We want to see it again. We liked what we saw from our guys.” (via LoHud)

At this point, and after Joe's explanation, I think it's safe to say that we're going to see the 6-man rotation for the rest of this season.  For some reason, whether it's Joe or Cash or ownership or input from the staff or a combination of any of those people, the Yankees refuse to look objectively at the big picture when it comes to their staff and make a decision.  After telling us that this past week would be the final audition and a decision would be made, that plan was scrapped and now everybody gets another turn through, another audition, that will chew up another week and presumably show or not show enough for the team to make a call.

The decision would have been easy if A.J. would have gone out and bombed against Bahhston on Thursday night, and I'm sure that's what everybody was expecting.  But with as much lead as he's already been given on his leash, the fact that he turned in a decent performance when he needed it the most, and the fact that Joe changed his mind in the 11th hour on Sunday, I think that points to the decision makers previously listed secretly wanting A.J. to be the 5th man and that group giving him every opportunity to be that guy.  A.J.'s good start combined with Phil's 2nd bad start in a row gave them just enough to be able to justify keeping A.J. around for another turn and they took it.

And since they took it, and since the team continues to play well, and since they have regained the division lead and hacked a bunch of games off the magic number in the past 5 days, the Yankees (and Joe) can get away with these indecisive shadow games.  There's no pressure on them to cut down to 5 men because of their current standing, and they've shown themselves now to be unwilling to demote A.J. based on merit, so why bother creating another story if they don't have to?  They can just keep managing the 6-man story as they have been the last couple weeks.  And it allows them to give an extra day's rest to Bartolo and CC, whether those guys want or need it or not, and to focus on planning out the postseason rotation.

I'll come out and say that I still think it's a stupid idea, but after the events that unfolded over the weekend this is how I see the Yankees playing it for the rest of the year.  There's been enough inconsistency from their rotation each time through that they can easily say they haven't seen enough to make a decision, and with them still sitting pretty in the playoff picture, there's no reason, from their perspective, to boot somebody.  Phil can come out tonight and throw a gem and A.J. can completely bomb and that still won't change anything.  Joe will still get up in front of the mic and say that they "like what they've seen" from each guy and "we don't want to rush a decision" until time runs out on the regular season and they don't have to make that decision anymore.
Posted by Unknown at 12:15 PM No comments: