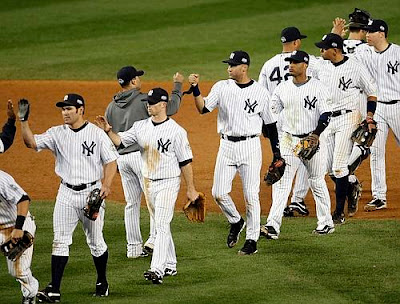 * I know Joe and Tim were in love with Pedro last night, but COME ON!! Just to recap in case you missed it, Pedro is a crafty, wily, creative, tough, smart, intelligent pitcher who thinks out on the mound and has 219 wins to just 100 losses in his career. His stuff isn't what it used to be, but he's a crafty veteran who thinks during each at-bat and isn't afraid to throw any pitch at any point in the count. He has 219 wins and a 2.93 career ERA mainly due to his toughness and creativity and craftiness on the mound. He's the greatest pitcher of this generation because he's so intelligent and tough on the mound and that's why he has 219 career wins. And he also lost the fucking game.

* I can't be too hard on Pedro, though, because I honestly did not expect him to throw even close to as well as he threw last night. For the most part he had the Yankees completely off balance, but he fell victim to the same disease CC had in Game 1 and got in trouble on a few bad pitches. With his high pitch count early, I expected him to be out after the 5th, so it shows there's still gas in the tank, even if it is leaded gas.

* There just aren't enough ways to explain how great a play Jose Molina made in the 4th inning throwing out Werth at 1st. He slide to his right to backhand a curveball in the dirt, caught it cleanly, stepped into the batter in the left-handed batter's box and still fired a strike to Teix for the out. Not a chance in Hell Jorge makes that play; Christ, there probably isn't a chance in Hell he even catches the curveball cleanly. It's plays like that that make Joe look like a genius for sticking with Molina as A.J.'s catcher.

* The Teixeira homer in the 4th couldn't have worked out any better for him. He was looking changeup all the way and as luck would have it, Pedro happened to throw his worst changeup of the night; it wasn't even a batting practice pitch, it was a Home Run Derby pitch. He would have been better off setting it up on a tee and then getting out of the way.

* He came in just as hot as A-Rod, but since his first at-bat in Game 1, the Yankees have owned Ryan Howard. They're doing a great job of working both sides of the plate against him, getting him behind in the count, and keeping him off-balance with the mix of pitches. His golden sombrero last night was a thing of beauty; when 3 of your 4 K's come looking, that's undeniable proof that you have no clue what's going on at the plate.

* Hitting only slightly better than Howard right now is A-Rod. After being completely locked in and then some against the Twins and Angels, A-Rod has resorted back to reaching for the off-speed stuff on the outside corner that he was laying off of earlier. To his credit, he has put some good swings on fastballs and just missed at least 2 potential homers or doubles, and to the Phillies' credit they have done an excellent job executing the gameplan against him that Minnesota and Anaheim failed to, but it still doesn't look good when you're 0-8 with 6 K's to start the series. Because he's still seeing the ball well, I say he breaks out of it in Game 3 against Hamels.

* In case you haven't noticed, opposing catchers have been killing Yankee pitching this postseason. Mauer had his share of hits in the division series, Jeff Mathis was almost impossible to get out, and now Carlos Ruiz is knocking the ball around the yard. I don't know how or why this is happening, but it's the kind of quirky occurrence that gives Tim Kurkjian a woody under the BBTN desk.

* The "DJ Hero" highlight remix before the bottom of the 7th was hands down the gayest thing I have seen in a long time. It made Adam Lambert look like Charles Bronson by comparison.

* The bottom of the 7th was a defining inning for both managers. Girardi made a great call to pinch run Gardner and then hit-and-run with him and Melky, and Manuel made an equally bad one allowing Pedro to start the inning when he was clearly tired and then take him out when Posada pinch hit for Molina in favor of Chan Ho Park when Pedro has owned Jorge over their careers.

* One questionable call by Joe was the Jeter sacrifice bunt. I'm all for moving the runners over in that situation, it's the smart play. But when the guy on-deck is Johnny Damon, who had not looked good at all at the plate so far in the game, I would take my chances letting Jeter try to move them over swinging the bat or just let him get a hit.

* Worse than the bunt call was Jeter taking it upon himself to try to get one down with 2 strikes. Like McCarver said, it's not often you look at a play and say it was a bad play by Jeter, but that was. He's one of the best 2-strike hitters in the game and down 0-2 was going to see some junk. Stay in there and see a few more pitches.

* The Rasheed Wallace "Ball Don't Lie" theory was in full effect on the inning-ending double play in the 7th. Howard obviously knew he caught the ball on a hop, otherwise he wouldn't have stopped dead in his tracks and thrown to second to get the out. The throw was way wide, pulled Rollins off the bag, and should have resulted in everybody being safe because no bases were touched. Howard knew it, the ball knew it, and only the umps didn't know it.

* My first look at the Philly pen was like my first look at a set of tits, it made me feel warm and funny inside. Chan Ho Park sucks, Ryan Madson was nothing special, and Yankees hit lefties so well that Scott Eyre doesn't even make me think once, let alone twice about pinch hitting for somebody in that situation.

* Jeter's turn of the double play to end the 8th was a thing of sheer beauty. Sure replay showed that Utley was actually safe, but you can't hang in any longer and make a better throw than Jeter did in that situation. He knew he was going to take a shot and he stood and delivered. As James Lipton would say, "simply stunning." 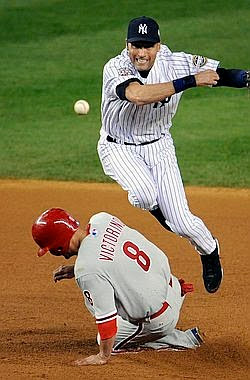 * After a shaky 8th inning, Mo was Mo in the 9th to get the save, and what better way than to do it by striking out Matt "Getting' Your Ass Hammered By Guys" Stairs? He threw 39 pitches in 2 innings, which is a bit of a concern even with a day off, and Girardi should definitely not use him for more than 3 outs tomorrow, but it was the smart play in a game that you had to win and in which you were holding a slim lead.

* When you factor in the situation and the opponent, last night was definitely the best game A.J. has thrown in a Yankee uniform. They needed at least 7 innings of shutdown ball last night and that was exactly what he delivered. His command was on point from the first inning and his curveball seemed to get better as each inning passed. His only speed bumps were in the 2nd and 3rd but he buckled down and got out of it, and really should have had a shutout because A-Rod should have knocked down the Stairs grounder in the 2nd.

This was the A.J. Burnett Yankee fans remember from all his victories against the Bombers and the one they were hoping to see all season. His back-to-back strikeouts on backdoor curves in the bottom of the 7th were beautiful to watch and the biggest evidence of his command and confidence on the mound last night. After that performance and with his history of working on short rest, I would have no problem throwing him out there for Game 5.

Joe still has a lot of big decisions to make regarding the staff for the rest of this series, and they all hinge on Andy's performance in Game 3 tomorrow, but let's not get ahead of ourselves. Andy has to go out and do his thing and the Yankee bats still have to wake up. If they win Game 3, though, you give serious consideration to turning to CC and A.J. on short rest to lock the rear naked choke on the Phils.
Posted by Unknown at 10:36 AM No comments: