It's only been a week since the last list, but there have been some major changes here.  Guys who I had as sure things last week now look like they're going to be on the outside looking in, and through some stroke of evil black magic, I think we're all going to be exposed to A.J. Burnett being a part of the playoff 25-man.  That's just a frightening thought, but you know what?  THE FACKING FRAUD SAWX AHH NAWT GOING TO BE THEY-AH!!!!  So that makes it a little better.

21) Jorge Posada- It wasn't looking nearly as good for Whore-Gay this time last week.  But a key HR here, a base hit there, some solid defensive plays, and the fact that the Detroit Tigers have never even heard of a left-handed pitcher makes him a virtual lock now.

22) Hector Noesi- He tired in his spot start earlier in the week, but after watching the rest of the September call-ups and scrap heap pieces like Scott Proctor shit the bed for the past few weeks, you have to think Joe is smart enough to realize Noesi is his most reliable "Swiss Army Knife" guy for the 'pen.

23) Jesus Montero- The Earth stood still last night as we waited for word on Montero's hand.  But the X-rays were negative and reportedly all is well.  We probably won't see him much, but having The Jesus lingering on the bench as a pinch-hitting option is a good idea.

24) Phil Hughes- All of this goes out the window if he wakes up tomorrow with yellow fever or shingles or something, but it looks like Joe has already decided that Phil is going to be one of his guys for the playoff 'pen.  And velocity or not, Hughes did work through his 2 extended auditions without allowing a run this week.

25) A.J. Burnett- I don't know how it happened, or why.  But I honestly think A.J. did enough in his last start against Bahhston and in his Yankee reliever debut last night to earn Joe's trust.  I personally don't think he deserves to be there, and I would take Bartolo over A.J., but I think Joe wanted A.J. all along and can justify taking him in his own mind after A.J.'s recent outings.

26) Raul Valdes- Because I can see Joe getting cute and going with another LOOGY now that he has Hughes and A.J. available to eat up some of Noesi's long-man innings.

27) Austin Romine- If Jorge or Jesus trips and falls down the stairs tonight.

28) Bartolo Colon- I would have more faith in Colon than I would in A.J. in a tight spot, but I think Bart's bad timing with his late-season flameout while A.J. pitched his best game of the year was his undoing.  It's a shame too, because Bart was a big part in keeping the Yankee rotation afloat earlier in the year.  But I think he's getting the shaft.

29) Luis Ayala- Not unless 2 guys ahead of him die.  He completely fucked himself last night.

Posted by Unknown at 2:38 PM No comments: 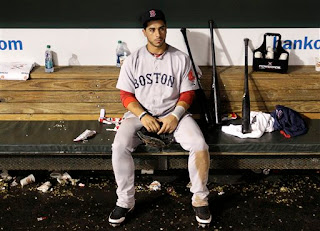 Just try to look at this picture for more than 5 seconds without bursting into giddy, childish laughter.  You can't.  Nothing captures how pathetic the Fraud Sawx and their sadsack Fraud Sawx Nation are better than this image.  I fucking love it.

Courtesy of The AP
Posted by Unknown at 9:29 AM No comments:

Now that we know how the AL playoffs are going to line up (and that they won't include the Fraud Sawx), we can look forward to the ALDS matchup against the Tigers.  But before we do that, I just want to take a quick spin around the Yankee news circuit and comment on some of the stories I missed while I was in Vegas.

- Robbie Cano Moved Up to 3rd in The Lineup

It makes sense because he's the team's best hitter, and Teix has been plain awful this year at times batting ahead of A-Rod.  But I would question those who think Cano is going to see more pitches hitting in front of The Horse rather than Swisher.  A-Rod hasn't been doing much of anything with the bat since coming back, and now he's got thumb and knee issues.  In my opinion, the best thing to come out of this move by Joe, besides getting Cano more at-bats, is the protection he'll offer Curtis in the 2-hole.  Pitchers might be more apt to pitch C-Grand carefully knowing they have to deal with Cano after.

Also makes sense.  No need to delve into the numbers more than everybody already has.  It's just a fact that Teix is having a down year, he's gotten too pull happy, and he knows it and finally admitted it this week.  You can't have a guy with a BA in the .240s and an OBP in the .330s hitting 3rd.  You just can't.  Hopefully last night was a sign that Teix is starting to snap out of his year-long swoon, but strategically swapping him and Robbie was the right move.

- Hughes to The 'Pen

No surprise here, as his results as a starter have been mixed since returning in July.  It's probably the only way Joe could have justified getting him on the postseason roster, which I think Hughes will make now even though he probably doesn't deserve to.  His velocity hasn't played up so far out of the pen, but Phil has managed to throw 2.2 scoreless innings since the move.  This has been a lost season for Hughes, no doubt.  He really needs to sack up and come into Spring Training 2012 in killer shape and committed to becoming the kind of pitcher he looked like in the first half of 2010.

Earlier in the week, there was still some uncertainty surrounding the 3rd starter for the ALDS.  A.J. turned a lot of heads with his outing against Bahhston on Sunday, but Joe showed his hand last night, using A.J. out of the 'pen and announcing Freddy Garcia as the 3rd starter.  They'll line up CC, Nova, Freddy, CC, Nova for Detroit and that's the way it should be.  Those guys have earned it with their body of work and most recent outings.

- Bartolo Left Out in The Cold?

With Nova and Freddy officially in the rotation, and Phil and A.J. looking like locks for the bullpen, the clock looks like it's struck midnight on the $900,000 Man.  And while that's a bit of a bummer considering how important he was to the Yankee rotation early, I think even Bart would tell you that he got more out of himself than he expected this season.  He gave the Yankees what they needed and helped ease the sting of not getting Cliff Lee, and he was another feather in Cash's cap.

Joe can say whatever he wants, but Boone Logan is a problem right now.  Game mattering or not, it's inexcusable to blow a 7-0 lead in the 8th inning and Logan got the ball rolling on that last night with his sloppy work.  Logan's recent struggles might not open the door for Raul Valdes to get a postseason spot thanks to Hughes and A.J., but I'm very concerned about matching him up with anybody in the postseason.  Guy just hasn't been consistent at all.
Posted by Unknown at 7:12 AM No comments: