An Open Letter To Jorge Posada

I know you still don't want to admit it, but the time has come for you to stop being an everyday catcher.  I know that's difficult to hear but it's true.  Your value to this team has never been behind the plate, but rather at it.  In the last 2 games you've hit 2 grand slams and that swing of yours is still a thing of beauty. 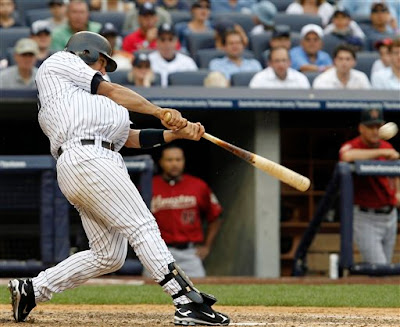 (Photo courtesy of The AP)
The thing is, the more time you spend behind the plate, the more your body wears down and the more time you spend on the bench and the DL instead of mashing the shit out of balls like you've been doing the last 2 days.  First game back behind the dish or not, when you have to leave after 8 innings because you're too sore and tired, that doesn't bode well for your health or the team's success.  And it's hard to produce at the plate when you got sore feet and strained hammies and messed up hands and fingers.

Don't take it personally, dude.  It's not like anybody in the locker room or in the stands is going to think less of you.  You're still going to be the slightly crazy vocal clubhouse leader that you have been over the last decade.  And you're still going to be hearing those "Hip, hip!  Jorge!!" chants raining down upon you from the bleachers.  And you're definitely going to be helping the team win more games and march towards title 28 with your bat in the lineup.  And isn't that what's most important?  Certainly more important than throwing on the chest protector and shin guards and crouching back there for 3 hours a day.

And sure, you can still catch every now and then.  Frankie's young but he's still going to need days off.  You can throw the gear on and hop in when you're needed.  But please, don't be a hero anymore.  It's time to face reality.  As the great Marcellus Wallace once said, this business is filled to the brim with unrealistic motherfuckers.  Motherfuckers who thought their ass would age like wine.  If you mean it turns to vinegar, it does.  If you mean it gets better with age, it don't.  Please Jorge, don't let yourself turn to vinegar.  Take off the gear, step into the DH role, and keep mashing the fuck out of the ball.
Posted by Unknown at 3:52 PM No comments:

... But the Yankees are back on top of the division, folks.

Sure they are still technically tied for the division lead with the Rays, but that's not the point.  The point is the Rays have had their fun in the beginning of the season, and it was cute and all, but they've spent the last 2 weeks coming back to Earth and now it's time for them to step aside and fall in line for the race for the Wild Card because the Yankees are fucking coming.