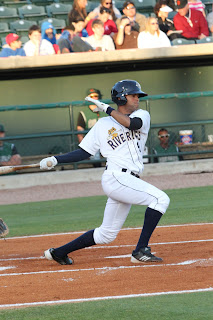 (I wonder if he'll get a call up or not.  Used courtesy of MiLB.com)﻿

Another month of Minor League baseball is in the books, which means it's time to go back and look at how that month went.  With the Major League trading deadline looming in the distance and the Yankees suffereing through some more injury hardships, this could be the last time of these young players get mentioned as part of the Yankee organization.  And with the start of Short Season leagues taking place in June, there are 2 more teams to follow.

"Setback" seems to be the word of the year to associate with Yankee injuries and related comeback attempts, and David Aardsma is the latest victim of the word after feeling pain in his right elbow after his most recent outing this week.

Erik Boland of Newsday has the details, but the long and short of it is that Aardsma is going to be shut down for at least a few weeks and then start to throw again.  The team says they still plan to have Aardsma back this season, but any kind of return in July is out the window now, and I'd be lying if I said I wasn't greatly concerned about the prospects of him making it back this year.

The Yankees could really use Aardsma considering the recent struggles of Cory Wade in the bullpen, but it would be unwise to rush Aardsma back after this setback.  Can't take chances with an elbow that's coming back from TJS. 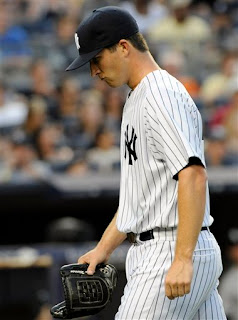 The first CC-less outing in CC's spot in the rotation since he joined the Yankees went about as poorly as it possibly could have.  It was not a good night for Adam Warren and it didn't get much better when any of the relievers who entered after he left came into the game.  Just an all-around bad pitching night and a bad loss, and the Yankees will probably have to make some more call-ups today to have a full bullpen of available pitchers.

- The best thing that could have happened for Warren was to get an early lead, and the offense staked him to a 4-0 in the bottom of the 1st thanks to a Curtis Granderson 2-run HR and an Andruw Jones 2-run double.

- The lead didn't last long, though, as Warren gave the 4 runs back in the 2nd.  A.J. Pierzynski led off the inning with a HR, Gordon Beckham hit a 2-run double of his own, and Kevin Youkilis plated one with a groundout.

- Paul Konerko led off the 3rd with another solo HR, and after 3 more hits and 1 more run, Warren's night was finished.  It was a rough outing for Warren, who couldn't locate his fastball on the corners and never commanded any of his offspeed stuff.  The White Sox hitters were perfectly comfortable at the plate and just teed off on the kid.

- David Phelps made his return, and struck out the side in the 4th.  Jayson Nix followed that up in the bottom half with a 2-run double and it was a 6-6 ballgame.

- But Phelps would struggle through the next 2 innings, allowing a run in each, 1 on Pierzynski's 2nd homer of the night, and Chicago led once again 8-6.

- The offense would score only 1 more run on a Robinson Cano groundout in the 7th, and sacrificial lamb Cory Wade got torched for 6 more runs through the last 3 innings to solidify the loss.  Wade was so bad that he couldn't even finish the 9th inning and Dewayne Wise had to come in to get the final 2 outs.