Site News: Gone For A Week

So as you may or may not have noticed, I made a few references to traveling to Germany earlier this week.  I'm actually flying out this afternoon and I'll be out there all next week participating in a work training program.  Because of this, I won't be able to cover any of what happens next week so for all intents and purposes AB4AR will be on a short break while I'm away.

There is a chance that I'll have some time in the mornings in Germany to write some stuff, but not much of one.  If anything really important happens, I'll throw up a quick blurb on it when I have time.  If nothing does, it'll almost certainly be all quiet on the AB4AR front.  I fly back a week from today, so next Saturday evening into Sunday you should see posts going up again and things will be back to normal on Monday the 14th.

Remember that thing I said a month ago about the comparisons between CC Sabathia and Amar'e Stoudemire when it came to their knee injuries?  It sounds like those comparisons could get even stronger after CC's latest setback with his swollen, degenerative right knee.  The knee didn't hold up to 55 pitches (on early rest) earlier this week, and now the plan is for CC to see Dr. Andrews again on Monday for a follow-up evaluation.  The possibility of microfracture surgery is on the table, which would end CC's season for sure and possibly even his career.

Joe alluded to both of those possibilities when he spoke to the media before yesterday's game, saying "I think that's fair to say, yeah" when asked if CC was done for this season, and "whenever you have degenerative issues that cause surgery or things like that, there's always a little question, yeah" when asked if this latest setback was career-threatening.  He clearly doesn't know what to expect except to expect nothing more from CC this season.  As bad as CC was before he hit the DL, I think Joe was looking at him as a slight upgrade over Nuno and Whitley.  Not anymore.

With CC gone, Pineda still setting back, and Billy Beane taking his nuts out and slapping the rest of MLB with them by trading for Jeff Samardzija AND Jason Hammel yesterday, the Yankee rotation situation has grown even more grim.  Next year ain't looking so hot either if this microfracture surgery happens.
Posted by Unknown at 10:41 AM No comments: 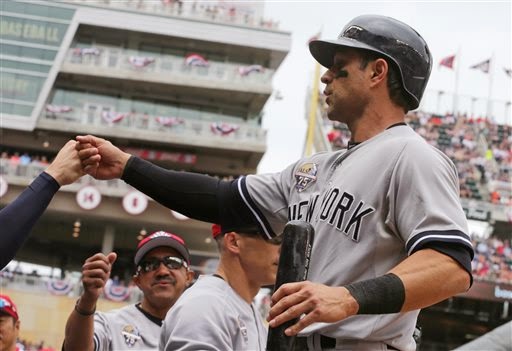