And So It Begins

In 2007-2008, the Yankees had a collection of 3 of the hottest pitching prospects in baseball, the future core of the rotation that would help usher in the next great Yankee dynasty.  By the end of this month, all 3 of those pitchers could be in other uniforms.  Not exactly what Cash had in mind when he had this big 3 together back then.

When the rotation starts to trend downward in the next year or 2, this will end up being one of, if not the biggest reason why.

The Yankees Are Rushing Jeter Back, Aren't They? 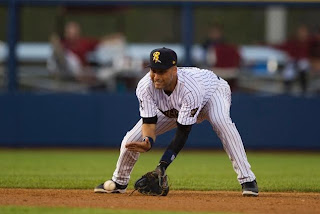 Mike Axisa touched on this yesterday at RAB, then Joe spoke to the media again about it before last night's game, and everything seems like it's coming together in the worst way possible.  Based on the changes that have already been made to his proposed rehab playing schedule, the aggressive initial approach to getting him back in game action and the heavy hints being dropped by Joe, all signs point to the Yankees trying to bring Derek Jeter back from the DL before the All Star break, possibly as early as Friday. 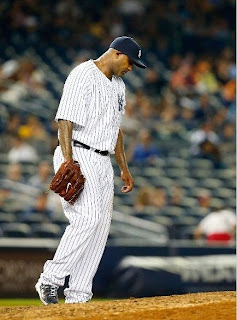 The losing streak is official.  And in the frustrating fashion that has become this team's defining characteristic in the last month.  Just an absolute, total, and complete no-show from the offense.  They had their customary 1 inning of hits, that led to the customary 1 run, and then disappeared for the rest of the night.  The good vibes from the Minnesota sweep are gone now that the boys have gone 3 straight games putting up just 1 run, and once again we're left to wonder how this team is going to hang around in the playoff race.  It has to be a crummy feeling going out to start a game for the Yankees these days.  You just know you aren't going to get run support and you basically have to throw a shutout to give them a fighting chance.  CC Sabathia didn't do that last night and he ended up the tough luck loser.

- As I mentioned, there was the typical inning of consecutive hits that only leads to 1 run and it was in the bottom of the 1st.  3 straight singles scored Brett Gardner for the 1st run and things looked like they were off and running.

- And then Robbie Thomson got involved.  On Zoilo Almonte's 1-out groundball single to right he elected to hold up Ichiro rounding third.  Ichiro.  The guy whose entire game is built on speed.  Maybe the throw would have beaten him, but you have to take the chance for another run there if your Thomson.  No run scored, the inning stalled, and that was that for the Yankee scoring.

- CC looked really good through 5.  He had 4 1-2-3 innings, 4 strikeouts, and had his sinker and changeup working to generate a lot of groundball outs.  He was lined up to go the distance early.

- And then he started to tire a bit.  He gave up leadoff home runs in the 6th and 7th innings to give KC the lead.  Just a couple fastballs that missed and didn't get away with it because they were only going 90-91 MPH.