(Yeah, I used the all caps "breaking news" tag for this signing.  It's a Major League player with legitimate offensive value, so I'm a little excited about that after watching the recent string of Quad-A signings.  Deal with it.)

After reports came out yesterday that the Yankees were in serious talks with Travis Hafner, they finalized those talks today by signing him to a 1-year, incentive-heavy deal to be their main designated hitter for 2013.  The deal is reportedly a guaranteed Major League deal, meaning a 40-man roster spot will have to be cleared to make room for Hafner.  But that's an acceptable sacrifice to make to add a potential impact bat like Hafner's, injury concerns and all.

I wrote about Hafner and my desire to see the Yankees sign him weeks ago, so obviously I'm happy to see them add him and his thump to the lineup.  Hafner is a huge injury risk, and as close to a sure thing as there is to end up on the DL at some point, but his offensive production potential as a righty masher hitting in Yankee Stadium is well worth that risk.  The Yankees are very familiar with Hafner and I have to think they did their homework on his medical reports before deciding to go through with this deal.  With what's left out there on the FA market, this is as good a cheap 1-year deal as they could have found, and one that could have potentially big returns if Hafner bucks the trend and stays healthy.

** UPDATE 2/1/13 1:46PM- Deal is official according to Jon Heyman.  Hafner's base salary will be $2 million per Ken Davidoff, and his deal also includes "reachable incentives" per Dan Barbarisi.  DH- Check. **
Posted by Unknown at 4:15 PM No comments: 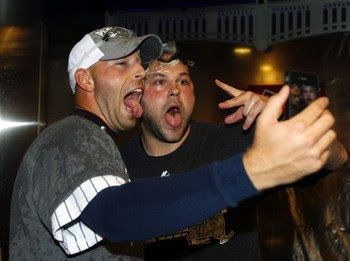 This Is Starting To Get Ridiculous

I know I'm not the only one who's already tired of all this A-Rod future talk, and I really hope I'm not the only one who's starting to get confused by all of it.  I know it's not surprising for a story like this involving Rodriguez to get as much of a media frenzy going as it has, but it's insane how quickly the focus of the story keeps changing.  First it was shock and anger that A-Rod could be stupid enough to do this again and get caught, if he actually did do it that is.  Then it was all talk about voiding the contract, which is probably never going to happen, working a buyout, and/or forcing him to retire.  Now we've moved on to just stating that not only is A-Rod never going to play for the Yankees again, but that he's never going to play baseball again according to this article from today's Daily News.

"According to numerous baseball sources, the hip surgery Rodriguez is now recovering from will likely derail his playing career, leaving him in such a diminished role that he may consider a settlement or an outright retirement. He still has five years and $114 million left on his contract."

Numerous baseball sources, huh?  Do any of these sources have medical degrees or did any of them participate in the surgery?  Because every medical source that's been involved makes it sound like A-Rod is absolutely going to be able come back and play.  And as Matt Imbrogno pointed out yesterday on one of our TYA email chains, a diminished A-Rod is still a pretty productive one compared to league averages for third baseman.

As for the "voiding the contract" talk, can that just be put to bed now?  It's not going to happen.  At all.  The CBA governs all things PED related and has provisions written into it to protect players from having this exact proposed scenario (contract being voided based on PED use) play out.  If the Yankees were smart enough to write language into Alex's contract that gave them a clear cut way out of the deal, we would have heard about it by now.  They don't have a case to be made for voiding the deal, and A-Rod has no reason to voluntarily retire to help the Yankees and 114 million reasons to try to come back.

The best thing the Yankees can hope for, if they really want to rid themselves of Alex, is to negotiate a buyout, try to get it down as much as possible from 100% of the contract value to lessen the payroll hit, collect the 85% insurance, and move on.  Anything other than that basically a pipe dream.