Taking A First Stab At The Postseason Roster

Now that's it finally September, I feel like I can start to talk about the playoffs without risking being a jinx to the Yankees' chances.  After last night's win, their magic number to clinch a berth is at a measly 19, and barring a collapse of the magnitude usually reserved for the other NY team, we can safely assume that the Yankees are going to be playing October baseball for the 3rd year in a row.  With that in mind, it's time to start trying to figure out what the Yankee postseason 25-man roster will look like, and as is tradition here at AB4AR, that will be done in an AP Top 25 Poll format where I rank the 25 guys who will make the eventual roster from 1-25, with the higher ranking players being the most likely to make the roster and the lower ranking ones being less likely.  And just like the AP Poll, spots are always subject to change pending on-field results.

26) Luis Ayala- If a bullpen guy gets hurt.  But he's trending downward lately.
27) A.J. Burnett- Only if a starter gets hurt.  Hasn't come close to earning a spot.
28) Jesus Montero- Depending on how he hits and how Jorge doesn't in September.
Posted by Unknown at 12:30 PM No comments:

Off To Never-Never Land 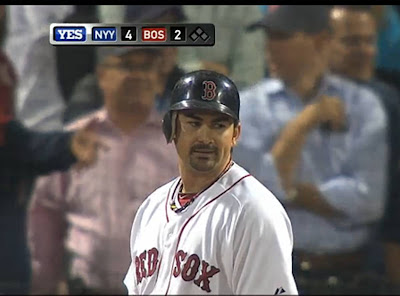 (Screen cap courtesy of MLB.com video)
Yeah.  It was a strike, bro.  Mo did you fucking dirty.

MVP candidate indeed.
Posted by Unknown at 9:36 AM 2 comments: