Andy Pettitte To The DL, Vidal Nuno Called Back Up

This doesn't come as good news after Joe talked him leaving the game early last night down like it was no big deal.  The Yankees have elected to put Andy Pettitte on the disabled list with his upper left trap injury, and have recalled Vidal Nuno from Triple-A to take his spot on the roster and presumably in the rotation as well.

It's a small bit surprising that Joe would be so open about how not big a deal the injury was in last night's presser and then have this be the move the next day.  The Yankees just got done botching the Kevin Youkilis situation, so they shouldn't really be saying boo about anybody's health if the actions aren't in agreement.  There's a chance this is the Yankees using this latest injury blip as justification for putting Andy on the DL and giving him a significant chunk of time to fully rest his back, which they didn't do last time.  That being said, it still doesn't do much to ease the concern about this being a lingering issue for Andy for the rest of the season.
Posted by Unknown at 5:17 PM No comments:

I don't go to the movies nearly as much as I used to.  There's just nothing good coming out anymore, and I was reminded of that on Tuesday when I went to see the new "Iron Man."  I won't spoil any plot points for you if you haven't seen it but simply put, it sucked.  Hard.  Just a completely scrubbed, Disney-fied version of what should have been an awesome movie.  I knew the Marvel movies were going to be in trouble when Disney bought the rights and IM3 is living proof.  If you're on the fence about plunking down 10 bucks to see it, take my advice and wait for it come out on video or Netflix.  You'll be glad you did.  Now onto the links!

- It's technically from last week, but Josh Norris had a great Q&A with Gil Patterson on Saturday, shining a little light on the changes to the organizational pitching development approach and the plan for Jose Campos.

- On Monday, Derek Albin of Pinstripe Pundits searched through the current 40-man roster to find the most likely casualties when the injured regulars return.

- Brian D. of Yankees Fans Unite looked back at Andy Pettitte's surprising comeback from retirement on the 1-year anniversary.  Easily the most pleasant surprise of last season.

- On Tuesday, Greg Corcoran of Bronx Baseball Daily profiled fringe prospect Caleb Cotham, who's pitched well in 2013.  I think Greg is a little high on his ceiling for Cotham, but there's definitely Major League potential there.

- Jason Cohen of Pinstriped Bible wondered if CC Sabathia will make it to 300 wins, and compared some of his W-related numbers to his contemporaries.

- SG of RLYW examined projections and platoon splits to try to identify the optimal outfield setup now that C-Grand is back in the picture.

- On Wednesday, Mike Eder of IIATMS/TYA commented on the near overabundance of starting pitching the Yankees currently have thanks to all their injury call-ups.  How does everybody play into the team's future plans?

- Mike Axisa of RAB analyzed the tough position the Yankees are in with Ichiro right now due to his contract and poor performance.  To all the Ichiro huggers out there who hated my anti-Ichiro offseason posts, I told you so.

- On Thursday, Drew Sheppard of FanGraphs had an excellent piece on Mo's fastball/cutter movement, complete with gifs, and some cool counting stats on his broken bat totals.  Does he really have to retire?

- Chad Jennings of LoHud had injury updates on almost every injured player under the sun, minus Pettitte and Stewart.

- Alex Pugliese of Yanks Go Yard asked if Dellin Betances being out of MiL options was a bad thing?  I think that answer is a resounding "no."  It's now or never for him.

- Bryan Van Dusen of The Greedy Pinstripes touched on the over-reactive nature of fans in light of Phil Hughes' bombshow of an outing earlier this week.

- Martin Riggs of NoMaas pointed out another statistical area of concern relative to CC Sabathia.

- William Juliano of The Captain's Blog broke down the Yankees' early performance in 1-run games to see where they stack up historically and if they're capable of continuing their success.

- On Friday, el duque of It Is High... mused on the Montero-Pineda trade over a year later, when none of the pieces involved have made much of an impact at any level.

Going back to a very familiar well for this week's jam.  If you thought I was going to stay quiet on all the awesome new song clips that QOTSA has been releasing this week then you are outside of your mind.  This album is going to kick so much ass. 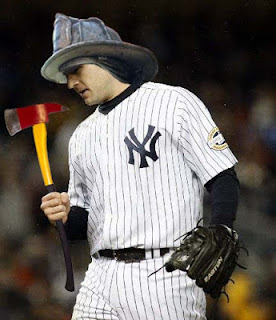 The injury epidemic of 2013 continued to spread last night, as both Andy Pettitte and Chris Stewart left the game early.  Pettitte's back started acting up again and the team diagnosed his injury as a tight left trap.  Stewart pulled up lame running the bases in the 7th and was clearly affected by something in his left groin.  There was no official diagnosis on his injury.  He was scheduled for an MRI after the game, but as of yet the team has not announced the results.

After last night's game Joe talked down the seriousness of Andy's back.  There's no word on whether he will have to skip another start or two, and I would imagine the team will give him a few days before making that decision.  Regardless of what that decision is, this should still be a greater cause for concern.  This marks the second time in less than 2 months that Andy has had back problems.  No one needs to be reminded that that's not a good sign for an older pitcher like him.  He's dangerously close to venturing into DL territory the next time it flares up again.

As for Stewart, while we won't know anything for sure until word comes out on the MRI findings, Bryan Hoch reported late last night that he could be heading to the DL to recover.  That would put the team in a very bad spot with their remaining catcher depth.  Austin Romine will take over starting duties for the time being, and he represents the only healthy catcher ont he 40-man roster.  Bobby Wilson would be the top internal replacement option, and he's only hitting .174 in Triple-A.  It's just the chance Romine needs if it turns out Stewart does have to go on the DL.  Hardly the scenario New York wanted, though. 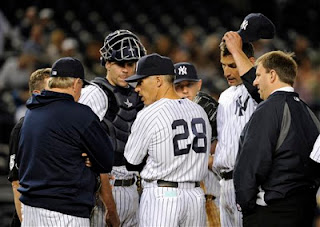