Small picture, Mark Teixeira's continued wrist problems are a nuisance but not the end of the world.  He responded well to the first bit of rest and the cortisone shot and was able to come back and be relatively productive for the last 2 weeks (.259/.328/.463  in 59 PA) in a time where the middle of the Yankee batting order has been without some of it's important bats.

Big picture, it could become more of a problem if allowed to turn into something that lingers.  Teix has been productive this month, but not nearly to the degree that he was in July.  His power is down, he isn't walking as much (8.2 %), and less than 3 weeks after the initial injury he's back to experiencing the same pain and inflammation as before and missing games.  It's starting to look like this is something more than just inflammation and soreness, and Teix playing every day can't be a good thing for it.  He said he originally hurt himself on a swing, so I imagine it can't feel too good for him every time he swings the bat.  All the initial tests showed no structural damage to the wrist, but what's to say that he isn't doing damage to it now or at least risking damaging it.  Is it really worth the risk of having a broken Teixeira in the playoffs or even losing him to not treat this injury properly?
Read more »
Posted by Unknown at 11:33 AM No comments: 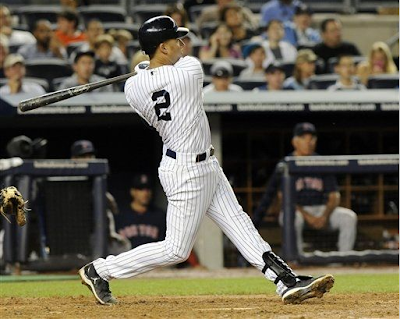 - Hughes did the job through 7, and D-Rob and Sour Puss worked the 8th and 9th with relative ease to secure the win.  1 down, 2 to go to end the Fraud Sawx's season.
Read more »
Posted by Unknown at 7:31 AM No comments: