What To Expect From Ivan Nova Tonight 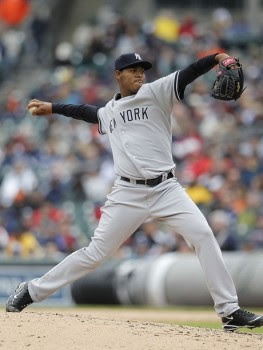 While it isn't taking Javy's spot in the rotation 2 weeks ago like it should have been, Ivan Nova will make his Yankee debut tonight against Toronto.

Nova works with 3 pitches: fastball, changeup, curve.  He works primarily with the fastball, usually between 92-94MPH, and is good at keeping it down in the zone.  The changeup is his secondary pitch and the curve is above average, but inconsistent.  When Nova has one or both working and can work both sides of the strike zone with his heater, he is tough to handle.

With all that in mind, and knowing that the Yanks are facing a slugging team tonight, what can/should we expect from Nova?  In a perfect world I would say I'd like to see his line look something like this:

But in reality, I think I would be happy with this:

Anything in between those 2 would be more than acceptable, especially given the power the Jays have in their lineup.  If Nova can keep the ball down tonight as he usually tries to do, I think he will do fine.  If he gets the ball up, he'll be in trouble.  There's a lot of opportunity for Nova tonight, both in establishing a role for the remainder of this season and maybe, just maybe garnering consideration for the postseason roster, and in starting to establish himself as a contender for a rotation spot for 2011.  It should be interesting to watch tonight and I am bummed out that I have to miss it being back out here, YES-less, in Wisconsin.

For a much better-written profile on Nova, check out RAB's Prospect Profile from last December.
Posted by Unknown at 12:55 PM No comments:

Back To The Grind

Mondays suck.  Everybody knows this.  And first days back to work after a week of vacation suck too.  So today is a doubly sucktastic day for me.

In case your day is sucking as bad as mine right now, here's some stuff to cheer you up:

- And a picture of Jorge's superhot cougar wife, Laura. 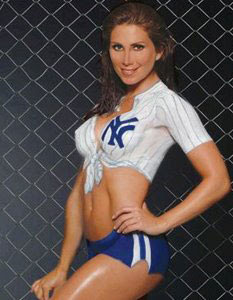