To Pitch Or Not To Pitch? 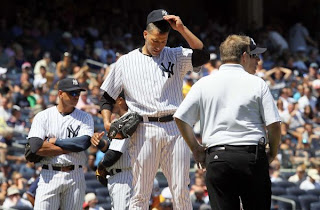 (Definitely don't want a repeat of this.  Courtesy of Getty Images)

First Andy Pettitte was going to participate in the World Baseball Classic this year.  Then the rosters were announced and he wasn't because the Yankees had concerns about him injuring himself.  Now it sounds like the window of opportunity might be open for him again per the latest report from Wally Matthews, who can actually be of value as a writer when he sticks to his reporting guns.  According to the report, Joe Torre confirmed that the Yankees would still prefer to have Pettitte skip the WBC but that both sides have until February 20th to make an official decision.

Personally, I think it would be cool to see Pettitte pitch in the WBC.  It's obvious he wants to, he's probably already in good pitching shape from his offseason workouts knowing that he was planning to play this season from the beginning, and I think we can all be sure this season is going to be his real, actual final one, so why not get that experience in while he still has the chance?

At the same time, I can see where the Yankees are coming from and when I put my homer fan glasses back on to look at the situation, I start to side with them.  Pettitte hasn't been a pillar of good health in his later years, and even though last year's injury was on a fluke play, those same fluke risks and regular injury risks are always there.  Pettitte is an important part of the Yankee rotation, and if he's going to get hurt and miss games in 2013, I'd rather it be because of something that happened in a Yankee uniform after the season started.  Even a minor injury in the WBC could be something that lingers and negatively affects his performance over the course of the entire Major League season, and that wouldn't be a good thing.

So we'll see where this goes.  My money is on the Yankees holding firm and us seeing Andy pitching in ST games in March rather than WBC games.
Posted by Unknown at 11:29 AM No comments: