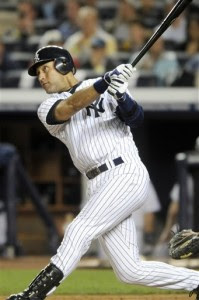 (Photo courtesy of The AP)
Well he sure as shit doesn't have the same patience as he used to at the plate and I will probably end up with more walks than him at the end of the season, but Derek Jeter can still fucking hit.

3-4 last night with a 3B, HR, 2 runs scored, and 4 RBIs.  All but single-handedly giving the Yankees the comeback win they notched to finish 15-7 in April and chop 2 more games off the quickly-shrinking magic number to eliminate Fraud Sox Nation from the division title race.

And just in case you hadn't noticed, Jeter has 18 RBIs from the leadoff spot, which ties him with Cano for the team lead.  So while he and Bob continue to rake, somebody send out a search party for Teix and C-Grand.
Posted by Unknown at 10:33 AM No comments: