It's been a little less than 2 weeks since Baseball America released the 2014 edition of its "Top 100 Prospects" list, a list that didn't include many Yankee prospects.  Only 2 of their players made the list and 1 those 2 was Masahiro Tanaka, so there was really only 1 true "prospect" to make the cut.

Yesterday, BA gave a further look inside the process that led to the final determination of their top 100 with the release of their full list of "also-rans".  This list included every player who made at least 1 appearance on one of the voters' top 150 lists and that list had a much greater accumulation of Yankee farmhands than the final 100, 9 to be exact.  J.R. Murphy, Slade Heathcott, Mason Williams, Greg Bird, Luis Severino, Eric Jagielo, Aaron Judge, Ian Clarkin, and Gosuke Katoh all made an appearance on 1 top 150 list or another, exemplifying the high amount of "almost there" fringe top prospect talent that the system does have.

It's been talked about at length by everybody at some point this offseason, but the Yankees could very well make the jump into the top 10 of next year's organizational rankings if this second tier of prospects and a few guys returning from injury combine to have a strong 2014 campaign.

Nova Starting To Figure It Out 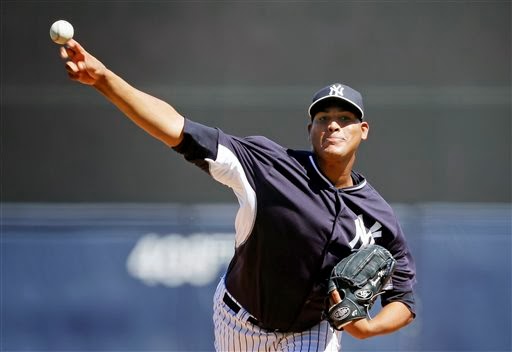 You know what the best part was about Ivan Nova's outstanding ST start yesterday?  It wasn't the no hits or walks, it wasn't the 4 strikeouts, it wasn't even the insane strike rate (86.11%!!!) or the fact that the Washington hitters only managed to put 2 balls in the air.  Nope, it was what Nova had to say after the game when he talked to reporters about the outing:

Nova hasn't always been the most accurate or self-aware when it comes to his personal evaluations of his outings.  Multiple times we've heard him tell the media that he felt good and thought he was pitching well after some of his more disastrous outings, and answers like that tend to indicate a certain level of immaturity that pitchers need to overcome to reach their full potential.  What he had to say yesterday sounds nothing like the Nova of old and more like a pitcher who's starting to put the mental and emotional pieces to his game together to match his natural physical gifts and plus stuff.  If that's the case and Nova is growing up and adding a more mature mental approach to the physical side of his game, watch out.
Posted by Unknown at 9:45 AM No comments:

- The ST win streak was upped to 4 yesterday as the Yanks beat the Nationals 4-2.  The story of the day was Ivan Nova, who dominated over 3 innings.  It'd be irresponsible to not mention that it was hardly Washington's "A" lineup, but Nova looked really sharp.  Pounded the strike zone, had everything working.

- Mark Teixeira took live BP for the first time this spring.  He's scheduled for longer sessions the next 2 days and then his 2014 debut on Thursday.

- A couple of young guys looked good in the morning, as both Manny Banuelos and Jose Campos threw live BP.  They should be pitching in games soon.

- After playing shortstop again yesterday, Derek Jeter is set for his first back-to-back appearance when he plays as the DH today.  I'd say him doing that this early in camp is a good sign that he's got his legs back under him.

- Andy Pettitte was yesterday's special guest instructor.  I say it's 20/80 he announces he's coming out of retirement by the end of the week.
Posted by Unknown at 6:57 AM No comments: