Kuroda Continues To Be Solid

Hiroki Kuroda pitched another good game today for the Yankees, but ended up the tough luck loser.  It was the 4th straight start in which he's allowed 2 runs or fewer, the 7th out of his last 10, and the 14th out of the 22 total starts he's made this season.  After an uneven start to his Yankee career, and some rough outings here and there since, Kuroda has settled nicely into his role in the starting rotation, a role that has become more important with the other problems that have beset the rotation this season.  Here's Kuroda's monthly ERA and FIP splits starting from April:

And after today's game, he's sitting at 3.19/3.78/3.76 for the season.  That's exactly the type of production the Yankees have been seeking and missing for years from their #2 starter, and they're finally getting it from Kuroda.  There are still some questions surrounding the rotation as a group, but there should be no more questions about Kuroda's ability to pitch and pitch well in the American League.  With him on board, the top 2 spots in the Yankees rotation are locked down and that's a good thing to know if you're a Yankee fan.

Posted by Unknown at 5:04 PM No comments: 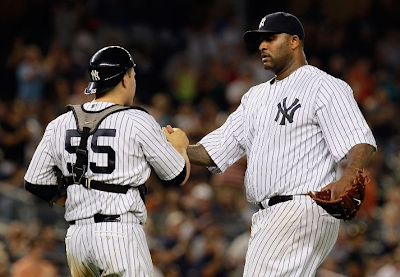