And hopefully the first of many more.  After stumbling and bumbling through the series in Tampa, the Yankees were on their game tonight and got off their season-opening schneid with a 6-2 win over the Baltimore Showalters.  Ivan The Terrible Great led the way in his season debut and was downright FILTHY.  His fastball was mid-90s all night, his curveball was nasty, his slider was nasty, and he was aggressive with all of them.  Dude didn't look very good at all in Spring Training but he turned in the best outing by a Yankee starter so far in this young season, which means only one thing.

More on the game tomorrow morning.  Frankie, tune up the band...

Posted by Unknown at 9:38 PM No comments:

A Shift In Defending The Yankees?

One of the more interesting subplots to this past weekend's season-opening series was the generous use of the defensive shift by the Rays against the big boppers in the Yankee lineup.  The shift is nothing new for them, as they employ it more than any other team in baseball, and nothing new for hitters like Mark Teixeira.  But to see it used against hitters like A-Rod and C-Grand was a new wrinkle, at least for me, and raises a question on whether or not the Rays uncovered a new way to defend against the powerful Yankee lineup.

Employing the shift against Teix is almost commonplace nowadays when he's hitting from the left side.  With the way he's become a pull-happy, all-or-nothing hitter from the left side over the past few seasons, it's something that any smart team would do.  Teix still hasn't shown enough in terms of his ability to consistently hit the other way from the left side to dissuade teams from using the shift and it worked to the Rays' advantage this weekend.  The Horse and Curtis don't have reputations as being prime candidates for the shift, at least not to the degree that Teix does, but in looking at their career pull/opposite way splits, it's not all that surprising that the Rays utilized the shift against them as well.  For the sake of comparison... 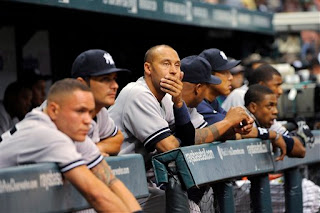 (The look of winlessness.  Courtesy of The AP)﻿

Another frustrating loss yesterday.  But at least we can all take solace in the fact that the last time the Yankees started the season 0-3 was 1998, and they ended up winning 114 in that regular season on their way to a World Series title.

- I know he was too rich for their blood, but the Yankees probably should have signed Carlos Pena this offseason just so they wouldn't have to face him.  He cracked another HR off of Phil Hughes yesterday and went 6-12 w/ 2 HR, 3 R scored, and 7 RBI in the series.  Dude is the definition of a Yankee killer.

- Hughes pitched the best out of the 3 Yankee starters this weekend, although I don't know how much that matters when he only made it through 4.2.  His fastball velocity was up and he mixed his change in well, both of which are encouraging signs.  He just needs to be more efficient and finish guys off with 2 strikes.

- Rough day for Swish at the plate.  He came up twice with A-Rod and Teix on base, 2nd and 3rd and 1 out in the 4th inning and at the corners with 2 outs in the 6th, and couldn't bring them in.

- It wasn't an ideal situation, but David Phelps made his Yankee debut in the bottom of the 8th with his family in attendance, so tip of the cap to him.

- Phelps: That less-than-ideal situation was 2 on and 1 out and Phelps handled himself very well in his Major League debut, getting a strikeout and a groundout to end the inning and the threat.

- A Rod: 1-3 with a 2B, BB, and a SB.  He was the most consistent hitter in the whole series and looked very smooth at the plate, in the field, and on the basepaths.

- Jeremy Hellickson: I didn't really give him his due in my post-game rant, but he was very good yesterday.  He mixed his fastball and change incredibly well and kept the Yankee hitters off balance all day, and was very efficient with his pitch count.  Just a shutdown performance.

- Raul Ibanez: Went 0-4 at the plate with 4 LOB and had that ridiculous misplay on Matt Joyce's "triple" in the first inning that cost Hughes a run.

The cellar-dwelling, winless Yankees head to Baltimore to take on the undefeated, division-leading Orioles.  Yep, you read that correctly.  Ivan Nova takes on Brian Matusz, first pitch at 7:05PM EST.