What's Up With Carsten? 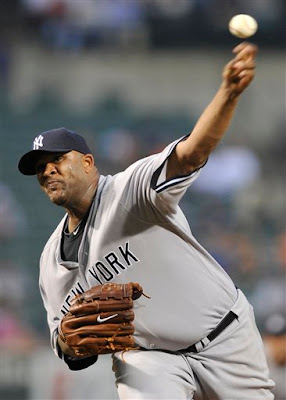 (Photo courtesy of The AP)
CC picked up another win last night with what looked to be a solid 7-inning, 2-run, 8-K performance against the steaming shit pile that is the Baltimore Orioles.  But beneath the surface of that victory are the continued issues that have plagued CC for over a month now and make his numbers not as good as they look.

Right now CC stands at 6-3 on the season with a 4.01 ERA, a 1.22 WHIP, and a .244 BAA.  The ERA isn't spectacular, but the WHIP and BAA are pretty solid, so at first glance it appears he is having another great year.  But 4 of his 6 wins have come against the previously mentioned Orioles, a team whose record and play on the field brings back memories of the Bad News Bears.  In fact, the Orioles are the only team CC has beaten in over a month, and his ERA in those starts is 2.79, so it's a safe bet to say he's been feasting on weak competition and his numbers have been inflated to reflect that feast.

The 2 biggest problems with CC this season have been fastball command and the long ball.  He has struggled to locate the fastball and has gotten himself behind in a lot of counts.  Last night, for example, he threw first-pitch strikes to only 16 of the 32 batters he faced.  Driving up a pitch count is no concern for a horse like CC, but when you're constantly pitching in hitter's counts it severely limits the options you have as to what you can throw.  More often than not, CC has had to go back to the fastball to try to even up the count, rather than be able to go to the changeup or power slider as his out pitch.  Like most pitchers, the fastball sets up the rest of what CC tries to do, and when he can't consistently locate the fastball for strikes like he's struggled to do lately, he can't give himself as many opportunities to put batters away.

The home runs have also hurt CC this year by driving up his ERA higher than it should rightfully be with his WHIP and BAA numbers.  He's only allowed 77 hits in 85.1 IP to this point, which is very solid, but 12 of those 77 hits have been home runs.  When teams are connecting of off CC, they are connecting big and making their hits count.  If you eliminated a third of the homers he has given up, even if they were all solo homers, CC's ERA would drop down to 3.58, which is much more like what we're used to seeing from him.

More than likely, the high home run rate is a byproduct of CC's inconsistent fastball command.  The more strikes you don't throw early in the count, and the more hitter's counts you get yourself into, the more pitches you have to risk grooving and the more at risk you are of giving up the big bombs.

The other peripheral numbers are there so there shouldn't be any worry about CC's stuff, it's just a matter of getting the fastball back into the strike zone earlier in the count.  I personally don't think there is anything physically or mentally wrong with CC.  He probably is working through some mechanical issues and once he gets those resolved and gets back to throwing more first pitch strikes, we can expect to see the homer rates going down, the ERA go down with it, and the wins keep on coming in.
Posted by Unknown at 10:01 AM No comments: