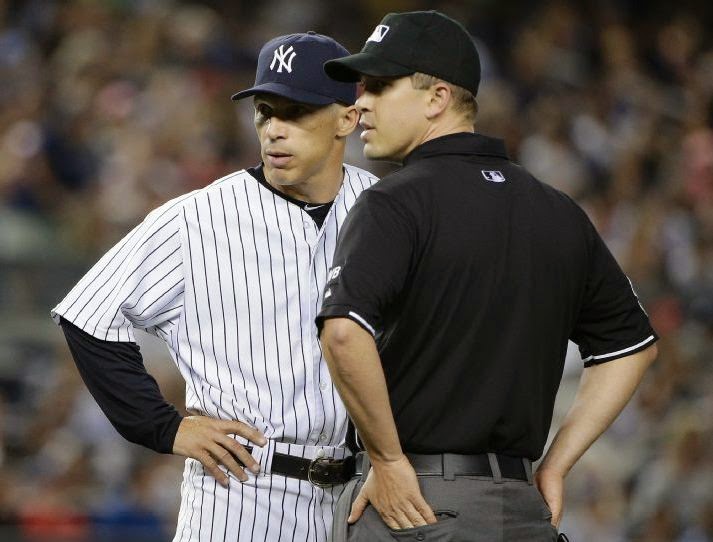 (What do you think here?  Gotta be Huffy, right?"  Courtesy of the AP)

I've been a slow convert to the Joe Girardi management method.  At first I really didn't like how he did things, and it was only in the last 2 or 3 years that I fully got on board Team Joe when it came to evaluating how he went about his job.  If I'm being honest, and also a bit of a homer, I think the job he's done since the start of last season, with the teams he's been given and the injuries he's had to deal with, has been the best work of his career and arguably the best managing job in all of MLB.  So now that I've prefaced this post with that setting of context, let me say that I have absolutely no clue what the hell Joe was doing with his bullpen this weekend.

... For finally getting another extra-base hit and ending a nearly 2-month drought without one!  Well done, Ichiro.  Well done indeed.

His triple to center field to lead off the bottom of the 5th last night was Ichiro's first of the season.  It was also his first XBH since May 3rd, when he had 2 doubles against the Rays.  That's a stretch of 115 plate appearances, 56 calendar days, and exactly 50 games between XBHs, which is almost impressive.  You'd think someone with Ichiro's "speed" would be able to leg out a bloop double at some point over a 56-day span, but he found a way to not even hit enough bloopers for one to drop into a favorable spot.  Helluva job by a world-class hitter to keep a streak like that going.

For those keeping track, Ichiro's season batting line is down to .297/.349/.335.  He's hitting .268/.303/.296 in the month of June, his production regressing back to a more appropriate level now that he's playing every day.  Just another friendly reminder to all the Ichiro lovers out there that he's washed up and to the Yankee front office that it's never a good idea to sign a no-power hitter in his late 30s to a multi-year deal. 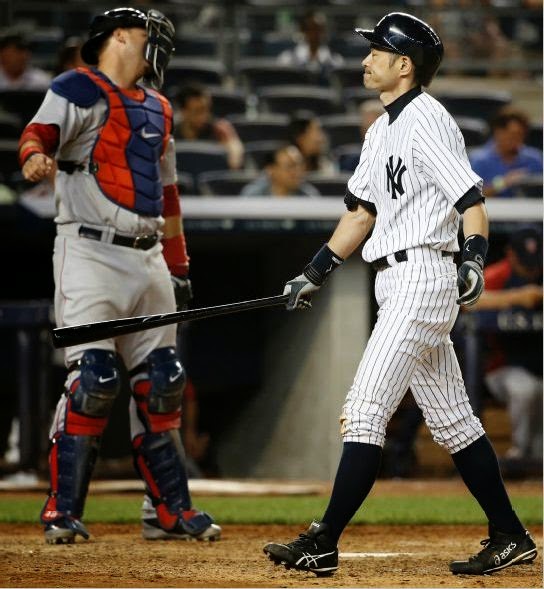 At this rate, I honestly don't know if I'm going to be able to keep writing these.  The Yankees are so horrible to watch these days, even when you don't get the chance to watch them often.  I watched as much as I could of last night's series finale against Boston on ESPN, but there was just nothing entertaining about the game.  Chalk it up as another series loss and another week spent hovering around .500.

- Chase Whitley's crash back to reality started early in this one.  The Red Sox got 1 run in the 2nd thanks to a double by Yankee murderer Mike Napoli and a ribbie single by Stephen Drew.  They got 3 in the 3rd when Big Sloppi crushed a fastball for a home run to take a 4-0 lead.

- It took a Boston error to set the Yankees up in the bottom of the 3rd, but it was a lot of hard work on their part to get a run in.  Ichiro stole second base, moved to third on Brett Gardner's 10-pitch at-bat, and scored on a Derek Jeter single that came on the 11th pitch of his.  That's big time manufacturing.

- The Yanks did it the easy way in the 4th.  Mark Teixeira yoked an 0-1 changeup that John Lackey put on a tee for him into the right field corner for his 15th home run of the season, and Carlos Beltran hit his 8th on a curveball to get the deficit down to 1.

- With a rested 'pen, Joe had a quick hook and yanked Whitley after a 4-pitch walk to Jackie Bradley Jr. to start the 5th.  That backfired as Shawn Kelley and David Huff allowed 3 runs to score.  Why Kelley and Huff were the first 2 men out of the 'pen in that situation, I'll never know.

- The offense hung tough with 2 more runs of their own in the bottom of the 5th on a Brett Gardner RBI double and Jacoby Ellsbury RBI groundout, but they blew a big chance to pull closer when Beltran got thrown out at the plate in the 6th.  They'd never create another good scoring chance.