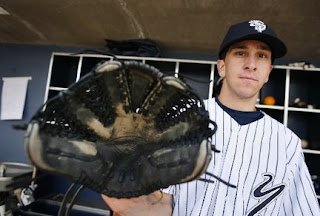 ** This is my other contribution to Prospect Week over at TYA from earlier today.  Enjoy. **

One of the more intriguing members of the Yankee farm system is a player who hasn’t showed up on any of the top prospect lists I’ve seen over the past few months and likely never will. That player is Pat Venditte, the ambidextrous relief pitcher from Double-A Trenton. Venditte is conversation-worthy because his ability to pitch with both hands essentially makes him three pitchers in one. He can be the switch-pitcher who keeps hitters guessing, lessens the need for managers to play the matchup game with their bullpens, and inspires the creation of a new set of rules specific to ambidextrous pitchers; he can be a strictly right-handed reliever with a fastball-curveball pairing; he can be a lefty specialist with a sidearm fastball-slider combination. Yet Venditte was left unprotected by the Yankees in last year’s Rule 5 Draft, he was not invited to Spring Training, and he’s likely ticketed for a return trip to Trenton to start the 2012 season despite being 26 and coming of a solid year of 132.1 combined innings pitched for Trenton and in a Mexican winter league. This begs the question, is Venditte actually a prospect? Or is he destined for a career as organizational depth?

Romine's Back Injury Killing Any Chance Of Catcher Competition

Austin Romine has been out with a back injury since almost the minute he arrived at camp this year and the words coming from Joe so far indicate that the Yankees are going to take it easy with him this spring, thus killing any chances of him competing with Francisco Cervelli for the backup catcher spot.

“We’re just making sure that area is very stable. We want that to come back very stable and strong before we put him back. Because he had an episode last year, last August. Once he leaves here I don’t want him to have a setback."

I'm higher on Romine than most everybody else out there, so I'm obligated to talk about this, but the reality is that Romine probably wasn't going to beat out Cervelli for the spot anyway unless he had a big time ST or Cervelli got hurt.  The bigger concern here is that this back issue is the same one that shut Romine down for some time last year.  Catcher isn't a position that's easy to play and stay healthy as it is, so Romine doesn't need lingering back issues to start the season.  Hopefully he can get back to 100% and be ready to start the season healthy in Triple-A.

Does It Really Matter If The 5th Starter Competition Is Rigged? 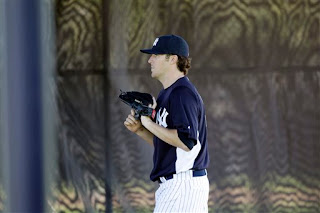 (If I had a vote, I'd pick this guy.  Courtesy of The AP)
Earlier in the week, Joel Sherman caused a bit of a stir with this story in The Post that included this comment on the "Hughes vs. Garcia" rotation competition:

"The competition is rigged. If it is close, Hughes wins. If it is advantage Garcia, but only slightly, Hughes wins. Hughes can only lose this by doing what he did last spring, having his fastball go on a mysterious hiatus."

Before I even had the chance to read the full story, the blogosphere was alive with people commenting on this development, to which I can only ask, why?  Why does anybody care if the competition is rigged?  Why is anybody even surprised that this is the case?  It's not like the Yankees haven't done this before.  The competition was rigged for Hughes over Joba in 2010 because the organization had already decided that they wanted Joba to be a reliever, and it was rigged last year to give the older guys (Garcia and Colon) the advantage over the younger guys (Noesi, Phelps, Warren).  It's what the Yankees do.  They throw the word "competition" out there any time there's more pitchers than available rotation spots to give the media something to talk about, but they've usually already made the decision.

And not for nothing, but if the competition is rigged again this year, shouldn't it be rigged for Hughes?  The Yankees have already invested more in him than they have in Garcia, and Hughes is more likely to factor into the Yankees' future plans as a younger pitcher with a higher ceiling.  The Yankees need to know what they are going to get from Hughes this season and what they can expect from him moving forward.  They don't need anything from Garcia.  So yeah, if Hughes pitches better than Garcia, or at least relatively close, he should get the spot.  If he pitches like absolute crap, then Garcia should get the spot.  And if they both end up shitting the bed, then it's onto David Phelps and Adam Warren to keep ManBan's seat warm for 2013.

I've learned to accept that this is how the Yankees handle their business when it comes to the rotation.  Now it's time for everybody else to do the same.  Don't waste time and energy writing about a non-story.  Whether the competition is rigged or it isn't, it doesn't matter.