My parents put our family dog down today, probably just an hour or so ago, which really sucks.  I've known for some time now that his days were numbered and had resigned myself to the fact that I was not going to be around when he finally passed, but that still doesn't make it any less of a bummer.  I grew up with this dog (we got him the summer before I entered middle school), so to think back on his life and reminisce is kind of like looking back at my own life and thinking about the person I've become in that time.  I was a goofy 11-year-old kid when we first got him, with no clue about anything, and now I'm a 26-year-old cubicle monkey of a man who has to pay taxes, schedule my own eye exams, and pretend like I actually give a crap about my job.  Makes me feel fucking old.  He was a good dog and I'm going to miss him, but enough of the pity party.  Let's get back to the baseball talk and onto the links!

- It's from last Sunday, but Mike Ashmore of Thunder Thoughts interviewed Trenton's pitching coach Tommy Phelps and got his take on Dellin Betances, Vidal Nuno, and Brett Marshall.

- On Monday, SJK of NoMaas beat me to the punch and passed out a very deserving round of credit to the Yankee bench.  And he didn't even mention Jayson Nix.

- Steve Goldman of Pinstripe Alley worked the numbers to show how, despite low totals, Andruw Jones is one of the greatest HR hitters in Yankee history.

- On Tuesday, friend of the blog Jamie Insalaco of Bomber Banter weighed in on everything he didn't like about Monday's HR Derby.  Can't argue with anything he said.

- CJ Hangen of Yanks Go Yard looked at what the Yankee lineup is missing with Brett Gardner's continued absence.

- Steve Serby of The NY Post had a Q&A session with Brian Cashman.  Definitely a must-read to get Cash's take on the team's standing at the break, A-Rod's decline, his relationship with Joe, and much more.

- EJ Fagan of TYA discussed the terms used when discussing starting pitchers and pitching prospects, and proposed some new ways of ranking them to come up with more appropriate terms.

- On Wednesday, Greg Corcoran of Bronx Baseball Daily explained why the Trenton Thunder are currently the best team to follow in the MiL system.

- Mike Axisa of RAB reopened the RISP Fail case at the ASB and pointed out how the Yankees have slowly been improving in that department in the past few weeks.

- Also on Wednesday, former TYA colleague Eric Schultz made his RAB debut with a PITCHf/x evaluation of Mark Teixeira's hitting approach.  Congrats to Eric on the new position.

- On Thursday, William Tasker of IIATMS listed the 10 worst offensive seasons in Yankee history.  I love Top 10 lists, and ones related to suckiness are even better.

- Fishjam25 of Yankees Fans Unite made a case for Cash going after Melky Cabrera in free agency this offseason.  With what he's done the past couple seasons, it's not a bad idea.

- Chad Jennings of LoHud had the latest injury updates on all the Yankee DLers.

- On Friday, Alphonso of It Is High... had a welcome message for Ty Hensley in light of the news of his sketchy MRI results coming out last night.

- William Juliano of The Captain's Blog debated the performance-enhancing-ness of Toradol in response to Gordon Edes' piece on the Fraud Sawx clubhouse situation, and whether it should be allowed under MLB's current policy.

I haven't gone old school in a while, so we're traveling back to the 70s for today's Friday Afternoon Jam.  A little Sabbath never hurt anybody, right?

Yankee baseball is back tonight, baby!  It's not really "back" back for me until Sunday afternoon when I get to watch them on TBS, but that still beats watching John Kruk stuff KC barbecue down his fat facehole.  The Yankees are comfortably in first place, they're rested, and they're getting healthier by the minute.  A hot start to the second half of the season can help quell any major trade deadline rumors before they even get started and start to put the Yankees in prime position to lock down the AL East quickly.

- The Yanks open with a series at home against Mike Trout and the Anaheim Angels of California.  This will be the third time these 2 teams have met this year, with each team owning a 3-3 record.  The Yankees took 2 of 3 in a mid-April home series.

- They get to stay at home after this weekend with another 3-game home series against Toronto scheduled.  6 games at home after 4 days to rest; there are worse ways to start after the All Star break.

- There'll be a mini-West Coast swing this time next week, 6 games out against the AL West bottom dwellers.  The last time they had one of these was late May, when they started to turn things around, so hopefully this trip can be equally fruitful.

- After that, the Yankees could have a chance to start putting the AL East race to bed with 6 games against Baltimore and Bahhston.  They're up 7 right now, they've got a relatively friendly schedule out of the gate, and they're getting their ace back.  Time to start stepping on throats. 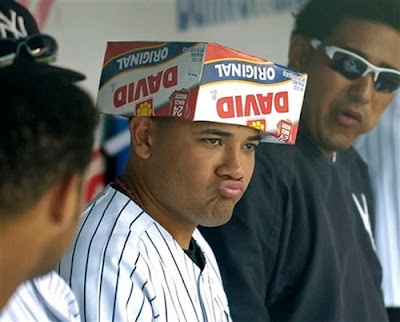 Melky Cabrera has been a popular topic around the Yankosphere this week after his performance in the All Star game.  I guess getting punked out by a former player that your team gave up on national TV in a game that was over after the top of the 1st inning has a way of making that happen.  Melky's 2006-2009 Yankee career was one defined by "not enough."  He could hit for a little bit of average, but not enough to be a legit top-of-the-lineup threat; he could hit for some power, but not enough to justify a full-time position in the lineup or make up for his lack of average; he could do some things defensively, but not enough to be called a good defensive outfielder.  All of this took place between the ages of 21-24 for Melky, a time where only the most elite players are playing at or close to the full potential.

What made Melky special was his personality and knack for always being in the middle of memorable moments.  He brought a little bit of fun, youthful, unpredictable energy to an otherwise stale clubhouse and the palling around that he and a young Robinson Cano did was always a topic to be touched on when discussing Melky.  He was essentially Nick Swisher before the Yankees signed Nick Swisher, just not with the level of production, and with the Yankees still somewhat married to the idea that an All Star, current or former, at every position was the way to go, he was shipped off to Atlanta before the 2009 season.  It didn't seem like a tremendous loss at the time; the Yankees were giving up a player who had never hit more than 13 HR in a season, never driven in more than 73, and never posted a wOBA higher than .333.