Joseph Pawlikowski Is Smarter Than Me

While I've been sitting here chewing my nails off the last couple weeks watching all the productive Yankee bench players from last year get scooped up by other teams with no moves being made to replace them, Joseph Pawlikowski has probably been kicking back, sippin' on gin and juice, and waiting to place his order for 2010 World Series memorabilia. His post today at River Ave. Blues on how the Yankee bench is just fine heading into this season not only put me at ease about the supporting cast, but also made me feel a little bit dumb for being concerned in the first place.

Cervelli has shown me enough both behind and at the plate to have me not concerned about being the full-time backup catcher so that was never a concern. I wasn't too keen on the idea of Ramiro Pena being the Swiss Army Knife infield-outfield guy, but as Joe brilliantly pointed out, Jeter and Bobinson don't take many days off and with A-Rod coming into this season at 100% healthwise, there aren't going to be as many situations where Pena is going to have to step in and contribute.

Outfield depth might be a bit of a concern, but as Joe expertly noted (again), the Yanks picked up Hairston and Hinske last season for what was the baseball equivalent of the 1$ box on the last day of a yard sale, so if needed, there should be no doubt that they can do it again.

With a lineup, rotation, and bullpen that are all among the top-5 in baseball respectively, the bench shouldn't even be a concern and I'm ashamed to say I let myself get that fired up about it. The Yankees are dealing with cracks in the tile and smudges on the mirror here, not gaping holes in the wall. And cracks and smudges are easy to fix. Thank you, Joe Pawlikowski, for showing me the light. If you ever make it out to New Berlin, WI, I owe you a beer.

In case you were too lazy to click on the first link, the complete post can be found here: 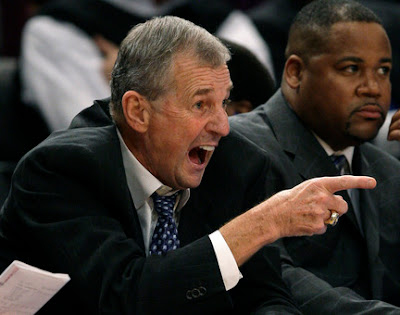 I know I've been hard on the guy this year, and I would hate to think that my harsh words had anything to do with his most recent health issues, so I would like to wish Jim Calhoun a speedy recovery. We miss you, Coach, and hope to see you back on the sidelines yanking guys for making stupid passes and screaming "WHAT THE FUCK ARE YOU DOING?!?!" at Sticks soon.

One thing I will say is that if Calhoun can beat cancer 3 times and hand out epic verbal beatdowns like this to lowly hippie freelance reporters:

then this newest health issue doesn't have a chance. This ailment better get some facts before Coach Calhoun's white blood cells come back and see it.

P.S.- If the Huskies have any heart, they will band together and stomp the shit out of St. John's tonight and Texas this Saturday.
Posted by Unknown at 12:30 PM No comments: