2014 Season Preview: What We Know And What We Don't Know (The Outfield) 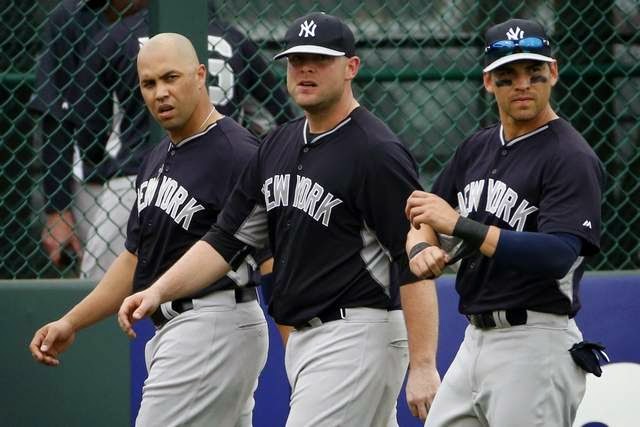 (Pretend the dude in the middle is Gardner.  Courtesy of the AP)

While the starting infield looks a lot different than it did at this time last year, I don't think I'd label the changes as a "makeover".  It's an impossible argument to make that this year's projected starting infield is better than last year's and I won't waste my time or yours trying to make it.  Moving to the outfield, however, that makeover label starts to fit a lot better.  This year's projected starting group, which includes 2 of the Yankees' premiere FA signings, looks much better and more well-balanced on paper than last year's.  There's above-average defense, better batting average and all-around on-base skills, fewer strikeouts, and enough pop in the bats to keep opposing pitchers honest.  After the jump, the knowns and unknowns for this remade starting outfield.

Thoughts On The Rotation Two Weeks From Opening Day 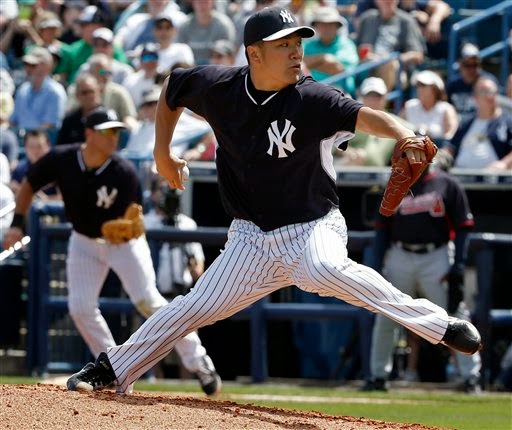 A little over 2 weeks from right now, the Yankees will be on the road in Houston to open the 2014 regular season.  They'll be facing the immortal Scott Feldman, and barring anything unforeseen they will send CC Sabathia out for his 6th straight Opening Day start to counter.  That's one of the few definites in the starting rotation right now, and with 11 spring games left to sort out the rest, the big picture is starting to come into focus.  Some random thoughts on where the rotation stands 2 weeks from Opening Day.

- No game yesterday thanks to the weather.  Hiroki Kuroda was scheduled to pitch, but instead he threw a 5-inning sim game at the complex to get his work in.  Michael Pineda is still slated to get the start today.

- Jacoby Ellsbury took indoor BP.  He told Joe his calf felt better, but Joe was leaning towards giving him today off too.

- Brendan Ryan was back to full workout duty.  More hitting for Tyler Austin.  Both are on track to return to games some time later this week.

- In a bit of off-field news, the Yanks lost their head of Major League scouting when Will Kuntz gave up the job yesterday to take a PR position with MLS.  Via Andrew Marchand, Steve Martone will replace him.

Posted by Unknown at 7:25 AM No comments: